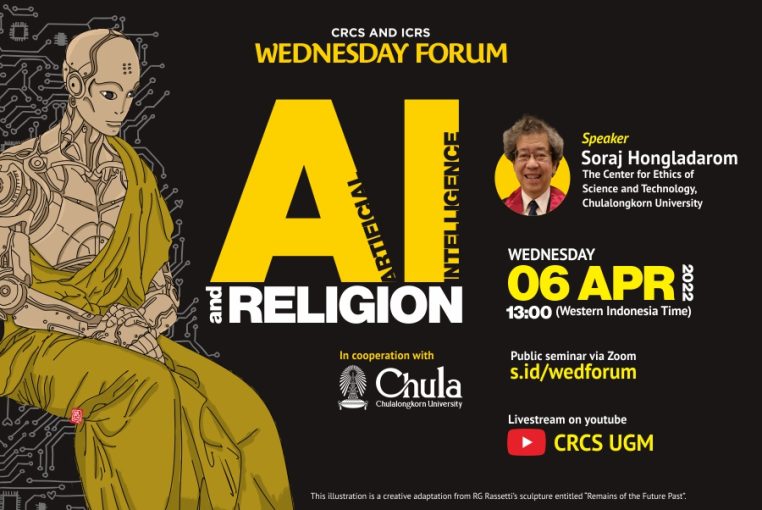 In this talk I would like to talk about the role that AI can play regarding religion. Since I come from a Buddhist culture, my example will be mostly from Buddhism, but I intend that my talk will be applicable to AI and other religions too. Among the questions that I will be addressing are: With the advent and rapid development of AI, what kind of impact will AI have on religion? There are many aspects of the impact that we can discuss. AI can be used to help the practicing of religion in various ways. An example of this is the robot monk in Japan. The robot can recite Buddhist sutras and practitioners can gather around it to listen to the sutra. Secondly, AI can be used to help with analyzing religious texts, such as doing concordances and searching for passages. This can be of great help to those who have to go through a large amount of texts everyday. Thirdly, AI can be used as an engine inside apps that aid with meditation. There are several apps that claim to do this. I will then reflect on these developments and will ask what do AI’s increasing roles in our religious lives and practices actually mean. Can AI itself become religious? If so, what does this signify in terms of our religions?

Soraj Hongladarom is Professor of Philosophy and Director of the Center for Ethics of Science and Technology at Chulalongkorn University in Bangkok, Thailand. He has published books and articles on such diverse issues as bioethics, computer ethics, and the roles that science and technology play in the culture of developing countries. His concern is mainly on how science and technology can be integrated into the life-world of the people in the so-called Third World countries, and what kind of ethical considerations can be obtained from such relation. A large part of this question concerns how information technology is integrated in the lifeworld of the Thai people, and especially how such integration is expressed in the use of information technology in education. He is the author of The Online Self and A Buddhist Theory of Privacy, both published by Springer. His articles have appeared in The Information Society, AI & Society, Philosophy in the Contemporary World, and Social Epistemology, among others.