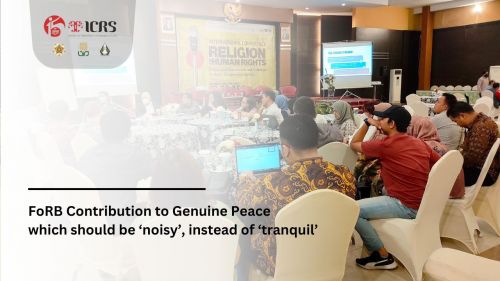 Written by Haris Fatwa Dinal Maula – CRCS UGM Student
Translation by Maurisa Zinira – ICRS Doctoral Student
As a social norm that is intended to apply universally, the existence of Human Rights (HAM) is an inseparable part of the discourse and life of Muslims in today’s world. Formally, Muslim countries that are part of the Organization of Islamic Cooperation (OIC) affirm the existence of human rights values ​​through the contents of the opening of the OIC Guidelines Charter in 1972. This commitment is also shown by the number of Muslim countries that ratified the International Covenant on Civil and Political Rights (ICCPR) and the International Covenant on Economic, Social, and Cultural Rights (ICSER) which was ratified in 1966. However, this formal acceptance did not necessarily make the human rights discourse accepted smoothly by the Muslim world. One of the crucial points in the Universal Declaration of Human Rights (UDHR) which is being debated is about freedom of religion or belief (FoRB). On the other hand, the implementation and enforcement of human rights in Muslim countries is also still weak and is often in the spotlight.

How do you see human rights relations from an Islamic perspective?

Actually, the problem is not whether Islam is compatible with human rights and FoRB, but what is the Islamic concept of human rights and FoRB. As a scholar in the sociology of religion, respective of this issue, I focus more on how the relationship between human rights, FoRB, and Islam is constructed by Muslims. In my article, Attitudes to Human Rights and Freedom of Religion or Belief In Indonesia, I said that Islam’s response to human rights is diverse. On one side are groups who view the compatibility between Islam and human rights, and on the other side, are those rejecting it on the grounds that human rights are Western product and part of propaganda to attack Islam, especially on its recognition of freedom and the right to convert.

In the Universal Declaration of Human Rights, the right to convert included in the topic of freedom of religion or belief which is categorized as a forum internum (non-derogable rights). Whereas in Islam, conversion is termed apostasy. For some Muslims, apostasy is not only sinful, but also a crime. Thus, human rights and FoRB are perceived, by some of these groups, as irrelevant, incompatible, and threatening the existence of Islam because they provide space for people to choose their religion or belief without bearing any risk.

I say that Islam is compatible with human rights and FORB. In fact, Islam must set an example. Why? Because Islam has many fundamental values ​​of respect for humans, including the principle of freedom of religion or belief. This form of Islamic commitment to freedom is found in many verses of the Qur’an. That is why, Islam recognizes that individuals have the right to embrace what they believe in, without any coercion. But of course, everything will depend on how Muslims interpret the verses. Therefore, how to provide a progressive interpretation is also a concern. For an example is what has been conducted by Abdullah Saeed and Abdullahi An-Na’im.

The abundant and multi-perspective interpretations of the postulates of Islam also contribute to the discussion of Islam and human rights, how do you see this?

There are two main views of interpretation: textual and contextual, or at some point can also be called exclusive and inclusive. We can’t avoid these (plurality on interpretation). This is inseparable from the nature of the text which requires various kinds of interpretations to be conducted. The textual model will produce an exclusive theological attitude, meanwhile the contextual one will generate a more inclusive one. Debate about the two approaches has been publicly acknowledged since each has its own arguments.

However, I think the most important thing is that these differences do not lead to intolerance, persecution of those who are deemed not in line with that interpretation. For example, there are those who view that changing religions is a sin. I, for example, do not want my children or grandchildren to change religions. That is, it.  I am not permitted do crime to prevent them from conversion.

The state thus needs to be present to maintain the stability of society. The state has roles to protect, accommodate, and respect the basic rights of its citizens. They should not ignore acts of persecution against certain groups different from the dominant ones.

Indonesia has regulated Human Rights and FORB in Article 29 of the 1945 Constitution, but the state has also limited them in Article 28J, how do you view these restrictions?

What is restricted by the state is actually the expression of religion in the context of space and time that can cause chaos in the public. However, quoting Zainal Abidin Bagir, the rules must also be clear. This is also what I think the Minister of Religion is doing. The Minister of Religion does not hinder but manages religious expression in public spaces. For example, the call to prayer which is part of Islamic religious rituals is then regulated so as not to interfere with other public interests. Another example is how the state prohibits religious activities to the point of closing public access. The state has the authority to prohibit a religious gathering, for example, that blocks roads for days.

What do you think about the phrase “keep order”? Are the cases of banning Ahmadiyah, the disbandment of FPI and HTI included in the context of “bringing things in order”?

This is indeed a long debate. I was once asked about the banning of Hizbut Tahrir Indonesia (HTI). I think the state has several considerations. For example, if HTI is permitted (to grow) it will disrupt national stability, especially regarding Pancasila. I think in this case, the government is justified because HTI is considered to use laws and ideologies that are not in accordance with the plurality of Indonesian society. The HTI movement itself is also seen as disturbing the community and disturbing order. What is important is that the state bases it on provisions that are objective, clear, and involve society at large.

The state should also concern about the way to educate society about the marginalized groups. This is indirectly related to human rights itself. The way people accept and respond to differences will be greatly influenced by how the state conveys it to the public.

Is it possible for Indonesia to remove restrictions on Human Rights and FoRB? Instead, the state should mere socialize how to respond to differences?

In the end, all countries, not only Indonesia, will reach a phase when human rights and FoRB are considered a necessity, a reality that cannot be avoided. However, these ideals seem to appear only in forums because we are witnessing biased state policies. For example, there are policies that benefit only particular groups. With this respect, the state seems to strongly create polarization by asserting one group over another.

Our state at this level appears to be inconsistent. On one hand, the state talks a lot about religious moderation. But on the other hand, many state policies are biased. This can be clearly sensed by several parties, especially those who are disadvantaged. More or less, it relates to the religious politics that occurred during the Reformation era. On one hand, the state criticizes populism, for example. But on the other hand, the government is doing populist practices. The government therefore needs to provide education to the public by producing objective policies.

Will the universality of human rights continue to be contested with the cultural relativism in many Muslim-majority countries?

Universalism and cultural relativism are debates that have been going on for a long time. However, it should be noted that the universalism of human rights is not only questioned by Muslims, but also other groups who usually have strong religious commitments. In Indonesia, the concept of universalism—in my opinion—is also difficult to accept because it contradicts the concept of culture, which includes religious frames. However, I think the debate between universalism and cultural relativism is an unavoidable reality. I don’t think this debate will end.

What is important now is to manage such discourse contestations. They should not lead to persecution, violence to groups with different points of view.

In your opinion, how do you instill awareness of human rights and FoRB in the context of higher education, especially using the concept of living values you wrote about?

Living values ​​is a comprehensive systemic approach. It ​​departs from a single concept of fundamental values. These values ​​are then internalized using a value-based environment or atmosphere approach. For example, providing facilities for disabled groups and an anti-bullying, anti-sexual and anti-corruption campus environment. One simple example, as the 1st Vice Rector, I proposed a regulation on the issue of “ethics of student consultation” (etika bimbingan mahasiswa) that obliges academic consultation be carried out on campus. Also, students are not allowed to hand in any form of gift to lecturers, and vice versa, lecturers are not permitted to accept gifts from students. This regulation is a way of bringing the value to life. There must be a means or an ecosystem that is created to employ these values.

We cannot say “no smoking” on campus without sanctioning those who transgress the law. Living values ​​must be fully understood from conceptualization to implementation. Living values ​​in the end must ensure the creation of an atmosphere based on those values. Even the people in it must become a living curriculum. Talking about tolerance will be meaningless if the lecturer does not reflect a tolerant attitude. So, everything must be complete and comprehensive.

With respect to FoRB, I often say to religious lecturers, especially at UMM (Universitas Muhammadiyah Malang) that it must be ensured that teaching should be conducted by ensuring that audiences or students are comfortable and theologically safe. The lecturers should not deliver provocative remarks that make students of different religions or beliefs feel insecure and uncomfortable.

In that regard, is it necessary to provide specific/special course on Islam, Human Rights, and FoRB in universities?

Human Rights and FoRB are interesting themes, especially related to their compatibility, relations, and intersection with Islam. I think there needs to be a large forum that produces discourses on human rights and FoRB, on its relations and intersections with Islam. The forum has an output such as a class called “Master Course on Shari’ah and Human Rights”. Its main function is to provide adequate academic insights to university students regarding the intersection between sharia and human rights, conflicts, compatibility, and related issues in Indonesia. This forum also serves as a forum to discuss different opinions related to human rights, FoRB, and Islam in an academic space. This will produce knowledge and thought that will make us mature in responding to differences.

This article is a translation of the original article published on CRCS UGM Website.