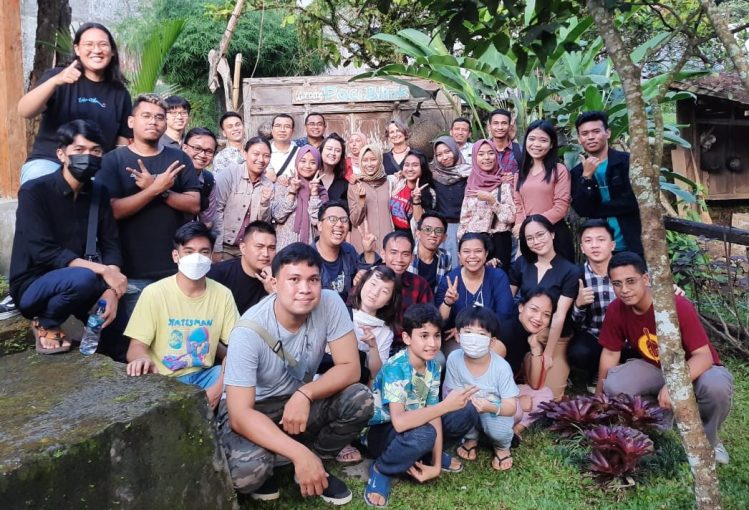 History has written that religion and its religious traditions, no matter how personal and sacred they may be, have involved the active participation of a community. Considering the variety of religious traditions, apart from the six acknowledged religions in Indonesia, there have also been many different teachings and rituals among the indigenous beliefs which are still practiced by Indonesian communities. This leads to potential arguments, inevitable tensions, and even religious conflicts at times. We understand that, occasionally, disagreement does not only happen between different religions but also within the religion itself related to its denominations. Therefore, when we talk about religious engagements, we cannot help but also include both interreligious and intra-religious relations since these two affect one another.

During the COVID-19 pandemic, people faced limitations in practicing their religious traditions. Therefore, relations with people of other religions were also reduced due to physical distancing, restrictions on gathering, and medical issues. Even so, the tension is still there which makes the dialogue necessary. As religious traditions may differ from one another, the active participation from each religious group is vital to the success and improvement of this type of dialogue. Even a small gathering of people from different religious backgrounds can nurture the opportunity to build bridges toward interreligious understanding. Not only will it build a strong foundation for people to engage in dialogue, but also to reflect on one’s own religious tradition. Furthermore, people converse in ideas and thoughts about other religious rituals, the do’s and the don’ts, which allow each one to grasp new spiritual knowledge and maturity from one another through this dialogue. The challenges of dialogue, post-COVID, add to the unresolved issues from before the pandemic further demonstrate the need for this work.

To learn about what students understand on this recent issue, the Center for Religious and Cross-cultural Studies, Universitas Gadjah Mada (UGM); the graduate program in Sociology of Religion, Satya Wacana Christian University (UKSW); and Faculty of Ushuluddin and Islamic Thought, Sunan Kalijaga State Islamic University (UIN Sunan Kalijaga) held a mini student conference hosted by UKSW on 16 May 2022, attended by 30 people, including doctoral students of ICRS. Most participants joined the class of Interreligious Dialogue in CRCS UGM by Izak Lattu, Ph.D and Fatimah Husein Ph.D, in which they presented their group project in the mini student conference, whereas many others who attended were either taking a related course or interested in interreligious relations. The topics presented in the event entitled “Interreligious Engagements in the Post COVID-19 Era” were categorized into three sub themes: Interreligious Engagements, Adat, and Local Context; Interreligious Engagements and New Social Spaces; and Interreligious Engagements and the Marginal Communities, all of which received great attention from the participants. Each sub theme included four groups presenting followed by a Q&A session.

The first sub theme discussed Islamic Intra-religious Conflict in Lombok, Christian-Muslim Relations in Poso, Tolerance in the Perspective of Muslim-Christian Youth, and Social Class in East Sumba. The following sub theme presented topics about Tolerance during Ramadan and Lent, Judaism Development in Minahasa, Tolerance through Graveyard in Yogyakarta, and Democratic Public Sphere in Manado. The last sub theme brought up issues on Women and Interfaith Dialogue in Indonesia, Gender Roles in the Bible for Interreligious Dialogue, Dialogue Between Christianity and Indigenous Worldview in Minahasa, and Narratives on Interreligious Marriage. Through this conference, it is vital to see that in the context of interreligious dialogue in Indonesia, not only should we consider the religious maturity of the community but also the conscious awareness of its importance.

What’s in store for interreligious dialogue

One of the Interreligious Engagements, Adat, and Local Context sub theme discussions brought up a particular topic on fostering tolerance among Indonesian youth with Muslim and Christian perspectives. The group observed how Indonesian youth understand religious tolerance and offered suggestions to foster the attitude of tolerance among them through Muslim-Christian dialogues. Religious tolerance consists of religious freedom, respect, rights to worship for other religions, and agreement upon disagreement. They presented the result of a focus group discussion (FGD) held with ten Indonesian youths (five each for Muslims and Christians), suggesting that in order to foster tolerance, the youth should go back to their religious teachings on how to allow other people to practice their religion. Tolerance will invite dialogue to communicate mutual recognition that leads to mutual respect needed by the youths in general. This is a good example on how the youths can participate in the application of interreligious tolerance in their local context, considering the findings from several studies that Indonesian youths tend to be intolerant. The questions in the Q&A session that are the challenges relevant even in the future are what kind of activities best facilitate tolerance to grow among youths and what might be the problems in doing so. There was also a suggestion to hold regular FGD for this purpose, along with other approaches suitable to the nature of the related youth groups.

The second sub theme Interreligious Engagements and New Social Spaces reviewed the relation of interreligious communities in the society. One of the topics discussed was the tolerance among Muslims and Christians during the Ramadan and Lent seasons. The presenting group explained how these two activities and celebrations are held in quite different ways which result in debate on whether inter religious tolerance is conducted equally among these religious groups. The survey involved eight participants both equal in religion and gender, trying to determine if the tolerance can be related with the concept of interreligious friendships by James L. Fredericks which leads to interreligious engagement. They suggested that there should be initiatives to hold open forum or casual dialogue to introduce Muslim traditions during Ramadan to Christians and vice versa to ensure the basic knowledge of these two events to develop interreligious friendships. The discussion was followed by a debate on whether the finding from the project, which is the lack of knowledge about particular religious traditions, might actually lead to intolerance and ignorance from other religious followers or if there was another factor which hinders close engagements from these two groups.

One topic from the Interreligious Engagements and the Marginal Communities focused on interfaith women’s movement in Indonesia as a resistance to male dominance. The group presented that women are invaluable in the interfaith dialogue since they are the most affected victims when there is interreligious conflicts and violence. Other literature that they referred to also indicates that women are the most effective in building peace, maintaining harmony, and minimizing violence. Men dominate interreligious dialogue in Indonesia which makes women’s voices rarely heard. On the other hand, the positions of women in the interfaith dialogue are very diverse and can defy the patriarchal society. They concluded by referring to an understanding Paul F. Knitter gave that dialogue is a way of understanding the differences therefore it requires correlational and equal participation from each party, both from male and female perspectives. The argument arises whether the male hegemony and the religious community in general can contribute to a wider participation by females in interfaith dialogue.

From three out of twelve topics above, we learn the difficulties we face dealing with religious practices and interreligious relationships. Norms, local context, social spaces, and marginal communities can play a very important role in determining the development of interreligious tolerance among different religious followers. Only by active involvement from each sector, tolerance can grow into a conscious relationship among religions. Most interreligious dialogues are similar to ‘a dialogue of the deaf’. That is, an interreligious dialogue will never work if the members are unwilling and cannot listen to others, as W.S.A. Rohmawati states. Therefore, it is very important to encourage the willingness and awareness of one another to accept differences in religions and religious teachings regardless of the different backgrounds. Apart from our basic understanding that interreligious engagement involves religious traditions and teachings, experiences and actions take a more important part in creating dialogue that goes beyond sacred texts and spiritual growth. Ways of living tolerance must be equally performed and considered as means that encourage active interaction to encourage interreligious engagement. The influence of personal approach, friendship in the interreligious scope, concrete examples from religious leaders and peers, and collective willingness to build dialogue, play a pivotal role in the existence of interreligious engagement.

Invitation for bridging the differences

A well-acknowledged religious tradition will help in building interreligious relations which lead to dialogue. The concrete actions which involve the acceptance of different religious rituals can only occur when people start to listen more and build friendships among themselves. This needs humility to be ready to empty ourselves so we are able to lose our ideas on what a perfect religious ritual can be.  It later will grow a spiritual enrichment where people establish empathy on what the other religions believe in and conduct. Only then a strong friendship is built and tolerance with respect is nurtured. Having said this, an active participation of tolerance will gain us engagement regardless of our religious belief. Moreover, the participation from religious leaders contributes greatly to the development of this interreligious engagement through everyday practices.

Interreligious engagement in many fields can start by improving mutual learning which also involves the appropriation of new teachings and practices. A group discussion, workshop, casual meeting, or an open forum may offer the opportunity to consciously learn from other religions and to better practice our own religion. The mini student conference in May 2022 from three different universities provided the opportunity for a small group of people to learn from one another and even to get to know other religions’ struggles. It created a good understanding and tolerance. When participants opened their eyes, minds, and hearts for other religious traditions and circumstances, they looked inside themselves and distinguished their strengths, failings, and the need to strive for the better version of themselves with this spiritual enrichment from other religions. They will return to their own environment and educational institutions with this new appreciation toward other religions and may bridge the religious gap with the people around them positively. This is when interreligious engagement finds its best form and implementation.