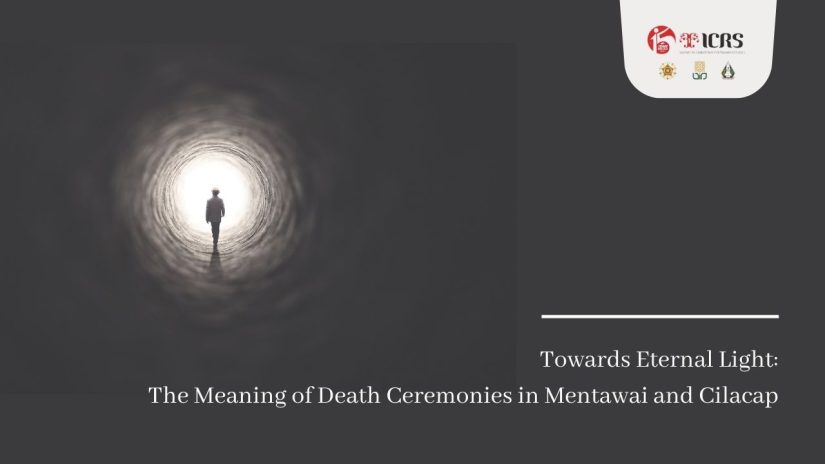 Death and the funeral process can be a rich source of inspiration for human efforts to find meaning in suffering, eternity in finitude. Religion, culture, social structures, and the vitality of these rudimentary elements of communal life depends upon ritually putting the corpse in its place, managing the relations between the living and the dead, and providing explanations for the existence of death. Throughout human history the problem of bodily decay has had to be solved in a meaningful way—the social body cannot function without agreed upon principles to respond to the universal presence of dead bodies. [[i]] This also happens in the context of Indonesian society with every religious and ethnic group having its own rich funeral traditions, formed as part of the culture and way of life of each ethnic group. At the Kamisan Daring Forum event on June 2, 2022, which was organized by the Indonesian Consortium for Religious Studies (ICRS), the Center for Religious and Cross-cultural Studies (CRCS), Center for Religious and Democratic Studies (PUSAD) Paramadina, Satunama Foundation, Institute of Sciences Indonesia (LIPI) and several other organizations, raised a discussion entitled ‘Towards an Eternal Light: The Meaning of Death Ceremonies in Mentawai and Cilacap’. On this occasion, two speakers were present: Yosep Sagari from the Mentawai Indigenous Peoples Forum Community and Muslam Guno Waseso from the Association of Pangudi Mysticism Intisarining Rasa (Paguyuban Pikir) Cilacap, Central Java.

Sagari in his presentation explained that for the Mentawai people the ritual of death is highly valued. Death makes a person leave everything forever, therefore the body must be returned intact and holy. The soul that leaves this world must be given up by the family. In the process, there is a traditional ritual to deliver the spirit of the deceased to be released and delivered peacefully forever. The first stage is that the corpse must be bathed and purified. After that, the body will be shrouded and picked up, so that it is fit to be delivered to the final burial place. Once at the funeral, the family will hand over the body to the traditional leader for burial. The position of the corpse faces north. Christians are given crosses and Muslims are given tombstones as burial markers. After the burial is complete, the family goes home and gathers. When you get home, there is a kind of prayer and ritual led by a tribal or customary leader to give up the death of the family. In the evening a paribai event is held, which is a ritual to find out whether the spirit that has been delivered to the supernatural realm, and from their communication it will be known what happened, the experiences, and feelings of the deceased will be related by the officiant. The next day the family returns to the cemetery to fence the tomb. On the second day, the assets of the deceased will be arranged and distributed among family members and the tribe. On the second evening, the final release ritual is carried out.

Meanwhile Waseso, in his presentation, said that the meaning of death in the PIKIR community is summarized in a belief concept, namely ‘Sangkan Antara Lan Paraning Dumadi.’ This concept explains the origin of creatures or humans. Sangkan is the origin of life, Paran is the life that is being lived, and Dumadi is the final destination after life is over. Dying in this belief is conceived as ‘tamating piranti’ or the end of the apparatus/non-functioning of all body organs/body (awak sekujur). The soul will return to the origin of God (asalira bali marang mulanira). The body will also return to its origin which consists of four physical elements, namely bumi (earth), geni (fire), banyu (water), angin (air). The death ceremony involves the body whose life has been left behind, which is referred to as the corpse or jasad (alternatively: jisim, bangka, bangke, kunarpa, or layon).

In death or Paraning Dumadi there are three important things that are carried out as part of the funeral ceremony. The first is ‘Pangrukti Layon’, which is how to take care of the corpse or layon itself. This consists of several processes, namely the process of taking care of the corpse, bathing it with flower water and Moringa leaves (daun kelor), bundling it and wrapping it in seven ropes because the human body will be returned to the four elements. The human body itself is understood as consisting of hair, skin, flesh, muscles, bones, blood and marrow. Second, ‘Untaping Layon‘, this is the ceremony of delivering the corpse to the cemetery. All problems are resolved at the time of departure so that the deceased return to the holy path. The third is ‘Pametaking Layon’, the process of burying the body facing north given two stakes which means surrendering the body to the earth. The cemetery is called paesan, which comes from the word paes which means to preen and dress up, because it is believed that death is better than living.

[i] Gary Laderman, Rest in Peace: A Cultural History of Death and the Funeral Home in Twentieth-Century America,  (Oxford University Press, USA, 2003).