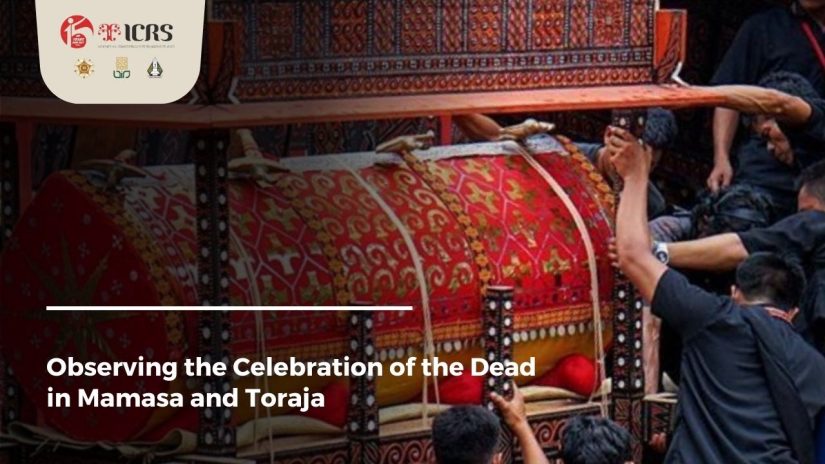 Across Indonesia’s rich cultural landscape are many unique funeral ceremonies. One of the most famous ones is from Sulawesi, namely Rambu Solo’ that is performed by the Torajan people in Toraja (or Tana Toraja). Rambu Solo’ is a traditional funeral ceremony which aims to respect the spirits as they return to immortality among the ancestors. In addition to Tana Toraja, other areas in Sulawesi such as Mamasa also have rich traditions of funeral ceremonies.[1] This topic was the focus of the Kamisan Daring Forum on June 2022. This forum was organized by the Indonesian Consortium for Religious Studies (ICRS), the Center for Religious and Cross-cultural Studies (CRCS), the Center for Religious and Democratic Studies (PUSAD) Paramadina, the Satunama Foundation, Institute of Sciences Indonesia (LIPI), and several other organizations.

The title for the forum was ‘Respecting the Celebration of Death: Fruits of the Hand of Mamasa and Toraja’. The first speaker was David Demmanasa, from the Rambu Saratu Mamasa Indigenous Community, West Sulawesi. The second speaker was Rivi Handayani, a Toraja culture researcher.

In his presentation, Demmanasa explained that for the Mamasa indigenous people, death is a very sacred event. For or the Mamasa, death is the process of moving from life in this world to a new world in the afterlife. Therefore, to start a new life, various preparations and ceremonies are needed to bring the dead person to the next realm. In the Mamasa cultural tradition, people who have died are believed to be able to communicate with the living and the dead are also believed to be able to influence the lives of those who are still alive by praying and sending blessings. Due to the sacredness of death for the Mamasa people, as a form of mourning and affection for the deceased, a funeral ceremony is held that should be as festive as a party. In the life of the Mamasa, this is called a death party, but perhaps the term death party is seen as strange and unique to the outside community.

Demmanasa shared that the form of implementation of the death party is highly dependent on the social and economic strata of the deceased and their families. Often, there are corpses left unburied for days, weeks, months, or even years. This relates to the large cost of the feast and the main sacrifices in the form of buffalo and pigs. The lowest level that sacrifices only pigs is called disalubai. The next level is called dipaktentenan (slaughtering a buffalo, several pigs, and in the ceremony using drumbeats). The third level is dibalado, which is a feast for death by slaughtering two to five buffalo. The feast of death that slaughters six to eleven buffaloes is called diruran. The highest level of this death feast, allun, is that which sacrifices a minimum of 12 buffalo and hundreds of pigs with funeral rites lasting for years with various complicated ceremonies.

Demmanasa also explained that in the tradition of the death party, other aspects such as clothing are also regulated. Whenever there is mourning or death, the entire family and mourners must dress in black as a sign of mourning. Those with high social strata can also use red ornaments as a marker of higher social strata (nobles). For the nobles for whom buffalo are sacrificed, there will also be a buffalo that is striped in color, referred to as Tedong Matanda. Demmanasa also elaborated that the shape of the coffin of each person who died also differed according to their social and economic status, some in the form of an ordinary coffin, some in the form of a miniature Mamasa traditional house. Regarding the slaughtering and distribution of the animal flesh, there are certain rules of meaning. First, in Mamasa’s ancestral beliefs, slaughtered animals are brought to the underworld, along with all their clothes and valuables. Second, meat is also distributed to strengthen the bonds of brotherhood. Third, there is a portion of meat that is intended for the public, however small it may be, but must be evenly distributed to all villagers. Fourth, there is the meaning of appreciation, because there is a meat section for traditional community leaders, religious leaders, government, and so on.

Another interesting thing in the Mamasa tradition regarding death, according to Demmanasa, is the taboos during grieving. According to Demmanasa, during mourning or as long as there is a corpse in the house, all families will abstain from rice until the mourning ends. Abstinence includes abstinence from working in the fields, abstinence from holding festive events, abstinence from making dishes cooked with bamboo, abstaining from building a house, and abstaining from looking for forest products. Furthermore, for the Mamasa community, people who die are treated like people who are going to go far away, so that all clothes and valuables from the corpse will also be put in the coffin and into the tomb. Finally, in terms of burial, the position of the cemetery also depends on social and economic strata, some are buried in the ground and some in miniature homes. After the burial, many ceremonies are still held.

The second speaker in this forum was Rivi Handayani. Handayani gave a presentation entitled ‘Toraja, Rambu Solo’and Tourism of Death’. Handayani explained that the Toraja are one of four ethnic groups in South Sulawesi (along with the Bugis, Makassar, and Mandar).  The mountainous land of Toraja separates it from other parts of Sulawesi. The name Toraja was popularized by the Bugis-Makassarese as a term with ethnic connotations taken from the Bugis term to’riaja (people from above). Toraja people are redefining the term to’riaja to to’raja (a king). Toraja is known for its spectacular 700-year-old party of death or solo signs. In the 1970s, the Toraja people’s awareness of self-identity, as well as ethnic identity grew along with the development of the tourism industry. In the 1990s, tourism in Toraja experienced further rapid development. The tourism industry opened opportunities for the Toraja ethnicity to renegotiate its position in inter-ethnic relations in Indonesia, especially in South Sulawesi. The New Order government’s acknowledgment of the existence of Toraja was marked by the printing of an image of the tongkonan which is a symbol of the supremacy of Toraja culture on the 1980 edition of the Rp. 5,000 note. Toraja’s openness to the outside world has transformed the Toraja ethnicity from an agrarian and traditional belief society to a Christian society that relies on the tourism sector.

According to Handayani, for Toraja people, death is a process of humans transitioning from life on Earth to spirits in the supernatural realm. Someone who has died is cared for or treated like someone who is alive but weak. A deceased individual is considered truly dead only after the entire Rambu Solo’ procession is carried out. The Rambu Solo ’ritual procession projects two things at once, namely sorrow and joy. The splendor and perfection of Rambu Solo’ can determine the fate of spirits in the afterlife. Rambu Solo’ is central to the implementation of Aluk (custom) because this ritual legitimizes one’s death and well-being in the afterlife. The buffalo sacrificed serve as vehicles to the afterlife. If the buffalo that is sacrificed is a striped buffalo, then the faster that person arrives in the afterlife. However, if the sacrificed buffalo is only an ordinary buffalo, then the journey to the afterlife will be slower. However, the cost for carrying out this ritual, especially for buying striped buffalo (Tedong Bonga) is very expensive, so this ritual is also a contestation of social class. For aristocrats, elaborate funerals are a means to maintain social status after death. For non-aristocrats they carry out the Rambu Solo’ ritual to pursue a higher social status even though ordinary people do not need to make a lavish death party by sacrificing a lot of buffalo and pigs as required by the nobility. According to Handayani, the high cost of parties and contests between classes is one of the challenges facing Rambu Solo’. Other issues related to modernization and changing tourism trends, government policies, and even Pentecostalism which redefines Torajan rituals threaten Rambu Solo’.