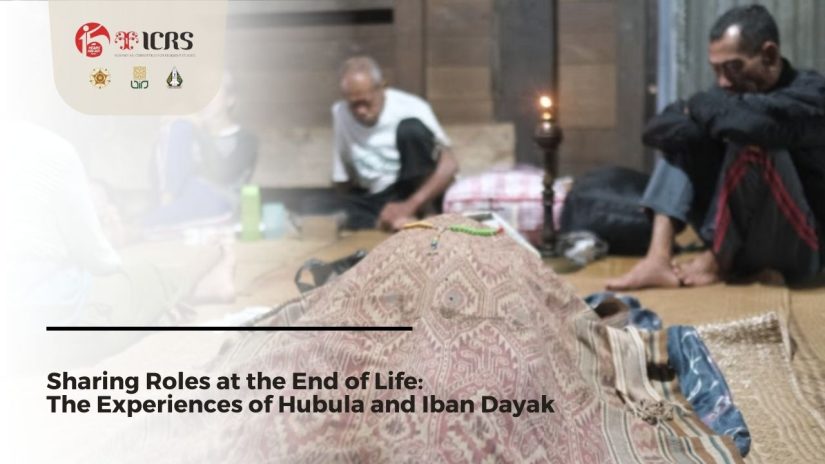 People groups around the world have different tradition of funeral ceremonies. Among Indonesia’s hundreds of cultures, there are a variety of funeral ceremony traditions. In conducting funerals, the focus is often on the various traditions and aspects of local belief systems. The June 16, 2022 discussion of funeral rites during the Kamisan Daring Forum centered on Hubula tribe in Papua and the Iban Dayak tribe in Kalimantan and the unique gender roles of these traditions. The forum was organized by the Indonesian Consortium for Religious Studies (ICRS), the Center for Religious and Cross-Cultural Studies (CRCS), Center for Religious and Democratic Studies (PUSAD), Paramadina, Satunama Foundation, Institute of Sciences Indonesia (LIPI), and several other organizations. The first speaker in this forum was Korneles Siep from the Hubula tribe, one of the indigenous tribes in Papua. This tribe inhabits the mountainous area of central Papua, precisely in the Baliem Valley. The second speaker was Imanuel Febrianto Dagang, of the Iban Dayak indigenous group of Kalimantan.

In his presentation, Siep explained that the traditional Hubula society in Baliem Valley, Jayawijaya Regency, Papua, differentiated men and women in domestic and public life. [[i]] The roles of men and women in funeral ceremonies in the context of the Hubula tribe are also different. Siep explained that the funeral ceremony is one of the most important ceremonies for the Hubula tribe because this ceremony is full of respect. In the death ceremony in the Hubula tribe, men play larger role, both in decision making and in the implementation of each stage of the death ceremony itself. Men play roles ranging from welcoming guests who are greeted with tears to organizing events, where each guest comes with donations such as sweet potatoes and pork. It is the role of men to receive the gifts with lament. In the implementation of the event, the slaughter of pigs and the cooking and even distribution of pork are also taken care of by the men. After eating, the body will be cremated.

In the funeral ceremony of the Hubula tribe, women are relegated to a lesser role. Women take care of many of the necessities of the event, from waiting for the corpse to its eventual cremation. Women are responsible for welcoming guests to the interior of the house, where guests are greeted with cries and lamentations. During the preparation of the meal before the cremation of the body, all relatives and guests present will receive a meal, the distribution of the banquet will be carried out by men, in general, but also assisted by women. After the cremation is carried out, the role of men is strengthened again in the stage of paying off debts from donations that have been brought by guests and relatives.

Dagang from the Iban Dayak Indigenous Community conveyed a different story, where in the Iban Dayak community funeral ceremony, women have many roles. In preparation for the death ceremony, the women guard the corpse at the funeral home. This is called the Ruwai activity. Women (mothers) sleep in the funeral home with their hands on their pillows. The goal is to not sleep too well, so that the bereaved family and all those guarding the corpse are not disturbed by spirits. Women also play an important role in preparing and covering the corpse with woven cloth as a sign of respect. The women are also responsible for lighting the telok lamp and keeping it on during the funeral ceremony as a symbol of lighting the way for the deceased to go to the afterlife. According to Dagang, this tradition has been preserved even though most of the indigenous people of the Iban Dayak have embraced the Catholic religion.

Furthermore, Dagang explained that most of the necessities for the funeral ceremony were also prepared by women, such as mats, agricultural tools, looms, and various personal items including clothes from the deceased. This is due to the belief that the person who died is believed to still continue his daily activities in the afterlife as if he were still in this realm. Finally, in the funeral rituals, women also help. At the time of the funeral, a rooster is sacrificed whose head is left at the burial site. After the funeral process is complete, the women return to their role in preparing meals for all the families and guests present. Women work together to prepare food and complete the abstinence ritual after mourning. Therefore, it can be concluded that the role of women is very important in all rituals of death of the Iban Dayak tribe.