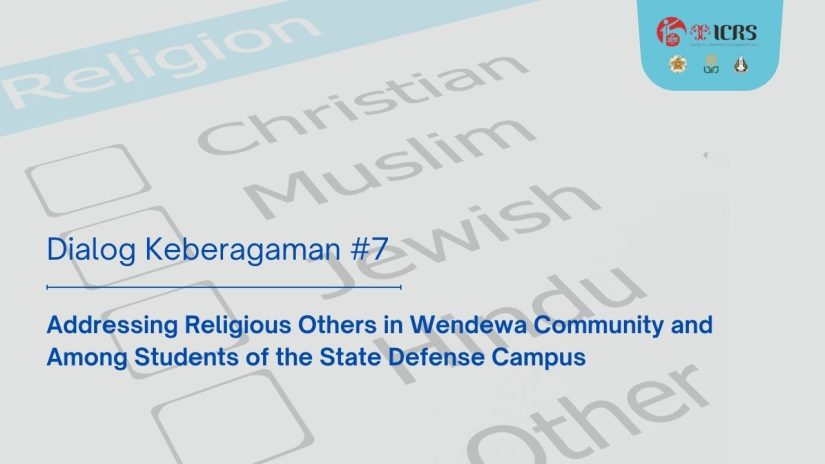 Women often face multi-layered suffering such as poverty, discrimination, gender-based violence/injustice, human trafficking, and domestic violence. Women are also often more vulnerable to religious-based violence, especially in situations of increasing religious intolerance. This was conveyed by the Rev. Dr. Suryaningsi Mila, Lecturer of the Sumba Christian Church Theology College. According to Mila, an alumna of the Indonesian Consortium for Religious Studies (ICRS) at the ‘Dialogue on Diversity #7’ which was held on July 16, 2022, with a presentation entitled ‘The Dynamics of Encountering Women in Cross-Community Reading Rooms’. In fact, according to Mila, women have an important contribution to maintaining peace and efforts to build peace in many places, including post-conflict areas. There are two villages in Central Sumba, North Wendewa and Watu, where women’s groups are very active in building a dialogue about life through sharing food and clean water and supporting each other in various ways. But it is ironic because women are often absent in dialogue forums organized by the Religious Harmony Forum (FKUB), although Muslim and Christian women have women’s religious organizations such as the Taklim Council for Muslim women and the Women’s Commission for Christian Women.

Interestingly, North Wandewa and Watu Asa Villages are the two villages with the largest Muslim majority in Central Sumba. In 2020, there were 2,231 Muslims and 222 Protestant Christians, 35 Catholics, 4 Hindus, and 3 Marapu adherents. On the other hand, North Wendewa itself is known as a village of harmony by the Ministry of Religion of Central Sumba, which is symbolized by a monument to the house of harmony in the form of a traditional Sumbanese house. The philosophy of the house of harmony is tana nyuwu watu lissi which means strong solidarity among all people from various religious backgrounds, social, economic, educational, and ethnic. Their kinship is like a connected earth and a stone that are close together. Most of the Muslims in this village are local residents and a mix of Sumba and Ende descent, and the rest are immigrant Muslims from Bima and Ende. Most of the Christians are the original Mamboro people who previously observed the Marapu religion. However, in general, the Mamboro people live in a social, religious, and cultural hybridity. Values of local wisdom are part of the daily life of the community. Some of the values ​​of local wisdom that are lived are as follows: the tradition of tana nyuwu watu lissi (strong ties of brotherhood/sisterhood), the mandara tradition (the bartering tradition of exchanging staple foods), the palomai/palonggamai tradition (sharing food, sharing basic needs, visiting each other in neighborly life), the tradition of pandula wikiki (helping others is like helping yourself); the tradition of li kawana li nikahni (involving men and women in every meeting), and the tradition of paoli (embracing each other as brothers and friends in a circle of solidarity).

With this background, Mila sees that Muslim and Christian woman in the villages of North Wendewa and Watu Asa practice their life dialogue based on local wisdom values. Therefore, Mila argues that such a community has the potential to conduct cross-faith readings of the Qur’anic and Biblical texts to see the dynamics of women’s encounters in cross-text/cross-community reading rooms, to build reflections on reading from women’s perspectives, and experiences to strengthen interreligious relations between groups. Mila believes that exchanging two different texts, but having the same message, can be a model of liberative and transformative dialogue (for liberation and renewal). Mila explained that according to Archie Lee, the term ‘cross,’ is ‘a process of jumping from one tradition to another to discover the new meaning from reading more than one scripture or oral tradition’. This method aims not only to compare two texts but also to illuminate one another. Cross-textual reading helps the Asian Christian community to expand their understanding in encounters with other religions. [[i]] Meanwhile, according to Mila, Daniel Listijabudi also develops Lee’s thinking by creating a cross-textual reading pattern, which not only resonates the similarities of the two texts but also discovers the differences including differences that cannot be reconciled/compromised to enrich the other, so that it can become one of the approaches in interfaith hermeneutics for peace work. [[ii]]

The two selected texts that Mila chose were the stories about the women who protected the young Moses/Musa. This story is written in Exodus 1-2 and Surah Al-Qasas 28. According to Mila, these two stories highlight women’s struggles against the cruelty of the king of Pharaoh. The struggle of women around Moses is relevant to the struggle of Muslim and Christian women in the two villages, because they cross religious, geographical, and cultural boundaries to protect their children and families. These women are moved by compassion. Their courage in taking risky actions, facing the threat of danger by crossing the boundaries of hostility, and working together for the survival of their community to save the powerless. Women challenge themselves and their nation to embrace ‘the outsider’ as a neighbor who must be protected.

The reading process itself is carried out in several stages. First, the preparation stage or internal reading where Muslim women read from the Qur’an and get an explanation from their Ustadz through tausiyah in the Taklim Assembly recitation event. Meanwhile, the Christian women’s group also read Exodus 1-2 and discussed during a Bible study facilitated by the church pastor. Then, in the first meeting, both parties held an introductory session, which was followed by reading selected texts in their respective religious groups while listening to readings from other religious groups. In the second, third, and the fourth meeting they exchange readings to find similarities and differences between the two texts but remain in their respective groups, then they exchange readings in mixed discussion groups. Finally, they discuss the texts as they relate to the issues within their village communities.

From this activity, Mila found that when women came to the scriptural dialogue, ordinary women had an important role in opening space for women to discuss their problems while reflecting on the struggles of the women who cared for Moses. Furthermore, the reading results no longer speak of textual reflection but rather a reflection on the daily life where women can color cross-textual readings by bringing their experiences and voices about women’s lives, struggles, and experiences and proves that women can penetrate the dialogue space around the text of the book.

Conversations between women in this activity also occur in a warm, fluid, and friendly atmosphere. Women learn from each other, and listen to each other, are full of empathy for one another, so that they strengthen the circle of women’s solidarity to protect life together. Therefore, a joint commitment from women after cross-community readings is needed to remain pro-active in building interfaith friendships, introducing and living the values ​​of local wisdom that support religious tolerance. They also need to initiate an  interfaith women’s agency and collaboration between the women’s commission and the Taklim council to fight together against domestic violence, marital problems, and various issues surrounding women.

In addition to Mila’s discussion for this forum, there was a second speaker, namely Dr. Fazlul Rahman, a lecturer from East Java UPN, alumnus of ICRS 2012. Rahman delivered a presentation entitled “Friendliness to People of Different Religions Among Students of the State Defense Campus”. According to Rahman, his research on this topic was motivated by the emergence and strengthening of the phenomenon of xenophobia or fear of people of different religions in Indonesia. Rahman argues that the problem of xenophobia does not only occur in the context of public life, but also in the context of universities where religious moderation ideally exists and it is hoped that hospitality will grow. Rahman explained that hospitality towards different religions leads to the issue of attraction between humans as moral beings (moral persons) and as individuals bound by law (legal persons). As a moral person, a person has absolute moral values ​​that are upheld and obeyed. These values are unconditional because they are an integral part of each person. Meanwhile, as a legal person, a person is bound by a law that is not absolute, depending on membership in a conditional society and certain situations and conditions. [[iii]]

In his research, Rahman asks two main questions: how does the influence of morality and legality affect the level of student friendliness and how does the level of student friendliness affect the xenophobia of people of different religions? In his research, he used quantitative methods to measure and determine how much influence the moral person and legal personas (independent variable) have on student friendliness through online questionnaires. Qualitative methods were used to reveal the perspectives of the lecturers of Islamic Religion and Defense courses. Rahman involved 372 student respondents from UPN Veterans Surabaya, UPN Veterans Yogyakarta, and UPN Veterans Jakarta. In addition, he also involved four lecturers who teach Islamic Religion and State Defense courses at UPN Veterans Yogyakarta and UPN Veterans Jakarta.

From this study, Rahman found that there was a significant influence of the moral person and the legal person on student friendliness based on the results of the R Square table of 10.4%. Meanwhile, the other 89.6% were influenced by other factors. The proportion of variance with the highest value was found in the dimensions of the moral person variable that affected student friendliness. In connection with these findings, the supporting factors which according to Rahman are influential are the plurality of the religious backgrounds of the students, the cultivation and application of hospitality characters formed through Pancasila, state and religion courses, religious teaching which is not only doctrinal by including the “Philosophy of Science” subject, and assignments through project-based learning and support from all leaders and teaching staff.