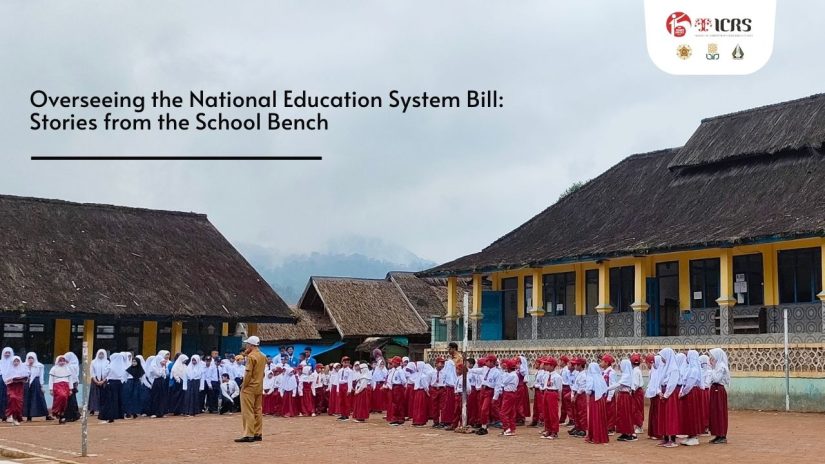 The Minister of Education and Culture Regulation Number 27 of 2016 has so far been the basis for efforts to facilitate religious adherents to get the right to religious education and trust. However, there are still many obstacles in the implementation of this policy.[i] This obstacle can be seen from the institutional aspects, service aspects, and aspects of understanding concerned stakeholders. Now there has been a draft law on the national education system that has received a lot of attention because it is suspected that it is increasingly closing the space for education in inidigenous beliefs, which is very much needed by adherents of indigenous religions. This issue served as the topic of discussion at the Kamisan Daring Forum on September 8, 2022. This forum was organized by the Indonesian Consortium for Religious Studies (ICRS), the Center for Religious and Cross-Cultural Studies (CRCS), and the National Commission on Violence Against Women (Komnas Perempuan), the Satunama Foundation, and several other organizations. There are three speakers in this forum: Agustino Damanik (Student at the University of North Sumatra and adherent of Parmalim, Rara Wulan (South Kalimantan Indigenous Religion Counselor), and Benjamin Jalalois, the Principal at Rindi Umululu State High School (SMAN) 1, East Nusa Tenggara (NTT).

Damanik, as the first speaker, explained that in 2009 when he was studying at the elementary school level, there was no indigenous religion education in the school curriculum. There was only a studio belonging to Ugamo Malim as a place to learn about Ugamo Malim, and those who taught were Ugamo Malim people who work as teachers in elementary schools. The same thing happened when Damanik studied at the junior high school level in 2015. When he was in seventh and eighth grade there was no course for indigenous beliefs, so the learning process was still carried out in the Ugamo Malim studio with parmalim residents who worked as teachers. However, fortunately, when Damanik entered the ninth grade in high school, the Minister of Education and Culture of the Republic of Indonesia Regulation Number 27 of 2016 on education services for indigenous religions was issued. Therefore, from that time on there began to be lessons on indigenous religions in schools according to the curriculum published by the Directorate of Belief and Indigenous Community. However, regarding the teaching staff, there are still obstacles because there are no special teachers who teach the subject of indigenous beliefs, so that those who teach are still Ugamo Malim people who work as teachers.

Damanik explained that as an indigenous religion adherent, the existence of indigenous religion education at school increased his enthusiasm and confidence, because he no longer had to receive different treatment. With a high enthusiasm for learning, Damanik was later accepted as a high school student of the Sopo Surung Balige Foundation, a superior school that had a very good reputation in 2018. In high school, education for adherents to indigenous religion continued. This is admitted by Damanik which adds to his enthusiasm for learning because he does not feel isolated in the new school. In the end, after completing his education at the high school level, Damanik managed to continue his education to the university level at the University of North Sumatra, in Medan.

Rara Wulan, as the second speaker, also had an interesting experience related to the implementation of indigenous religion education. Wulan admitted that during his education from elementary school in 2008 to graduating from high school in 2019, he always followed Christian religious education, even though he was an adherent of indigenous religion. This is because schools do not provide education for indigenous religion adherents both before and after the Minister of Education and Culture Regulation Number 27 of 2016 concerning education services for indigenous religions. Wulan stated that this is a sad reality because discriminatory practices in the field of education against adherents of indigenous religions continue to occur. At the higher education level, when studying at the College of Teacher Training and Education in Paris Barantai Kota Baru, South Kalimantan, it turned out that there were also no courses on indigenous beliefs because the university itself did not understand that indigenous religion had been recognized for its existence in Indonesia and was seen as equal to religion. which has long been recognized by the state. Wulan explained that it took a difficult struggle to explain what indigenous religion is to universities so that in the end they could understand and facilitate students to receive these courses. Wulan admitted that he had asked for help from the Indonesian Supreme Council of Trust to advocate for the problems he was facing so that his campus could accept his explanation. However, Wulan believes and regrets that in many schools and universities indigenous religions education has not been implemented.

A different experience came from NTT. Benjamin Jalalois Principal at State Senior High School (SMAN) 1 Rindi Umululu, NTT. Jalaois said that since 2015 the Marapu belief has been recognized by the government as a belief.  Since then, Marapu adherents have become more enthusiastic about carrying out religious life by forming local committees. Therefore, according to the regulation, the school found teachers or religious instructors who can teach about indigenous religions. Jalalois admits that it is not easy to implement these subjects in schools, because no one academically has the capability to do so. However, Jalaois collaborated with Marapu organizations in their city so that Marapu adherents themselves taught these subjects from 2016-2019.

From 2020 to 2021, the learning process did not run smoothly due to the COVID-19 pandemic. But in 2022, in the second semester, the school received a visit from the Directorate of Belief and Indigenous Community, the Ministry of Education, Culture, Research, and Higher Education (Kemenristekdikbud) to see the implementation of indigenous religions education in the school. Jalalois said that from the visit, the ministry then committed to support the implementation of indigenous religion education in senior high schools led by Jalalois by providing more competent teachers in collaboration with MLKI. This is a breath of fresh air for the adherents of indigenous religion at SMAN 1 Rindi Umululu.

These experiences were then responded to by two respondents. The first was Prof. Alimatul Qibtiyah, Ph.D. (Commissioner of the National Commission Against Violence Against Women). Qibtiyah argued that basically every citizen has the right to express his beliefs without coercion, limitations, or discrimination. According to Qibtiyah, from the experience of several previous speakers, Indonesia has tried to accommodate indigenous believers’ education, although this still needs improvement. So many good practices have been put in place, but improvements need to be made. Therefore, it is important to continue to supervise the process of reviewing the draft law on the national education system for 2022, in order to continue to pay attention to the education rights of indigenous religion adherents. The fear is that, while the regulation is a good step forward, the law may reverse some of the progress.

The second response was delivered by M. Mukhlisin from Cahaya Guru Foundation. According to Mucklisin, the implementation of indigenous religions education in various regions does have quite diverse dynamics. There are some areas that are already quite good in their implementation, but there are also some areas where the schools and universities do not . Mukhlisin also noted that the experience conveyed by the speaker was based on the regulation. However, according to Mukhlisin, what needs to be guarded at this time is the 2022 National Education System Bill (RUU SISDIKNAS). According to Mukhlisin, the purpose and function of education in the August 2022 National Education System Bill in Article 3 states that national education functions to develop the potential of students with the Pancasila character so that they become human beings who believe, fear God Almighty, have noble character, are independent, knowledgeable, and think critically. Furthermore, Article 4 states that national education aims to educate the nation’s life, form a religious society, uphold diversity, be democratic and dignified, advance civilization, and prosper human beings physically and mentally. Therefore, Mukhlisin recommends several things: first, in the implementation of education in Indonesia, it must prioritize democratic and fair principles and not be discriminatory by upholding human rights, religious values, cultural values, and national pluralism; secondly it is necessary to harmonize and operationalize these principles into policies and programs of schools, education offices, and the central government; third, prioritizing the content of religious and belief diversity and opening up spaces for interreligious encounters in schools, especially public schools; fourth, interpreting faith, piety, and noble character more broadly and not limited to religious rituals so that the teaching of faith, piety, and noble character needs to be guided by the principles of democracy, justice, nondiscrimination, respect for human rights, religious and cultural values, and national pluralism; finally, it is also important to involve civil society in voicing the voices of community groups that are not heard.