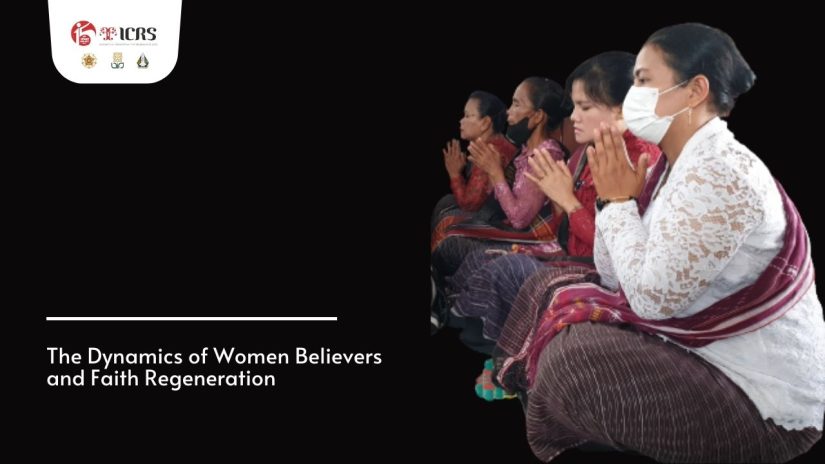 Written by Jekonia Tarigan
Early age is an important period for the development of a child. This begins in the prenatal period in which the brain, as the center of intelligence, develops rapidly.[i] For this reason, women play an important role in the formation of children, and this is especially so in the lives of adherents to indigenous religions whose values need to be continuously regenerated. This was the topic for discussion at the Kamisan Daring Forum on September 22, 2022. This forum was organized by the Indonesian Consortium for Religious Studies (ICRS), the Center for Religious and Cross-Cultural Studies (CRCS), and the National Commission on Violence Against Women (Komnas Perempuan), Satunama Foundation, and several other organizations. On this occasion there were three women who were the speakers: the first was Herta Simanjuntak, representing Puanhayati North Sumatra; the second, Agung Citra Official, representing Puanhayati Central Java; and the last was Ni Luh Ariani, representing Puanhayati Bali.

Herta Simanjuntak said that in general in Indonesia it is known that women are Mother Earth (Ibu Pertiwi) or in the Batak language, Siboru Deakparujar. This means that women are a source of dignity and regeneration of offspring (Ina Pangintabu). Furthermore, women play a variety of very important roles, for example: women are also educators and protectors (Nai pangampu Nai pangulosi); women also act as the first teachers and the closest people to the children (Ina Naulilagu-Naulibasa); women also act as managers in the family (Ina Soripada Napantas Marroha) and are in charge of domestic affairs (Parbahulbahul Nabolon Siantan Sidabuan Siboto Partaonan).

Looking at the Batak culture’s view of women, Simanjuntak argues that the strategic role of women who are believers is also quite broad. As the first teacher and the closest person to the child (Ina Naulilagu-Naulibasa), every mother expects her child to inherit her beliefs. Therefore, early education through exemplary and noble values ​​of belief must be taught from the womb to pre-school, so that children admire their mother as a source of truth. Furthermore, as educators and protectors (Nai Pangampu Nai Pangulosi), women must live out models of behavior that appreciate ritual beliefs, manners in daily life, hard work, and a willingness to share and have firm principles and not easily give up. Therefore, practicing women always need to inspire their children from a young age about the struggles of their ancestors, encourage them to be involved in penghayat activities, and become extension workers for their own children as part of the organization’s efforts to support counseling.

Simanjuntak also believes that women play an important role in the movement for change. Women have the potential and ability of soft power in caring for life with tenderness and affection. This will raise awareness of non-violence in the family to effect change. The role of women as mothers and educators also makes them key actors in producing a generation that is superior and has noble character according to the teachings of followers. This means that women are the last bastion in the resilience of families and communities in their efforts to transform the values ​​of appreciation for their children. In the end, according to Simanjuntak, the role of practicing women is not only domestic, but also for the community. Therefore, the role of women’s organizations such as Ina Parmalim Pangampu is also very important. In such organizations, women can strengthen each other and share experiences through discussion and advocacy training. They can also increase their creativity and economy through training on ulos weaving, utilization of used goods, organic farming, and the manufacture of dish soap.

In line with Simanjuntak, Agung Citra Resmi who represents Puanhayati Central Java also believes that educating women is the same as educating one generation. Official believes that women play an important role as actors in the regeneration and inheritance of noble values in the context of the increasingly marginalized teaching of ancestors. A woman’s strength lies in her flexibility and determination to continue fighting for the good of her family and community. Therefore, it is very important to provide mental strengthening and capacity building for women living in the region so that they can become facilitators of developing the potential of women who are religious and pioneers in transmitting the noble values ​​of belief and the noble values ​​of nationalism.

Regarding the issue of education, Resmi argues that women are the central actors of education in the family who play an important role in children’s basic education and ensure the growth and development of human civilization. Therefore, practicing women also need to continue to oversee indigenous religion education regulations that are regulated by the state, especially related to the 2022 national education system bill, which seems to be directed at discriminating against the rights of indigenous people.

In the end, Ni Luh Ariani who represented Puanhayati Bali closed the presentation by saying that related to the dynamics of women as adherents of indigenous religion, the formation of a puanhayati organization is an important step in the regeneration of followers, because it is not easy for women to appear in public if they are not supported by the community. an organization. Through the Puanhayati organization, Ariani invites all indigenous women to unite, support each other, and develop potential in the midst of very fast technological developments. However, women should not forget their important role in the family. Ariani believes that the mirror of parents’ success is in the success of their children. If the adherents do not succeed, then it is a failure of the parents and especially the mother. Therefore, for Ariani to be a believer is a call from the soul to be an example of noble values.

[i] Aliah B Purwakania Hasan and Eny Suwarni, “Policies and Practices for Promoting Multicultural Awareness of Indigenous Early Childhood Education in Indonesia,” International Journal of Child Care and Education Policy 6, No. 1 (2012): 63–94. p. 63