What’s Wrong with Our Theology: Towards a Contextual Epistemology 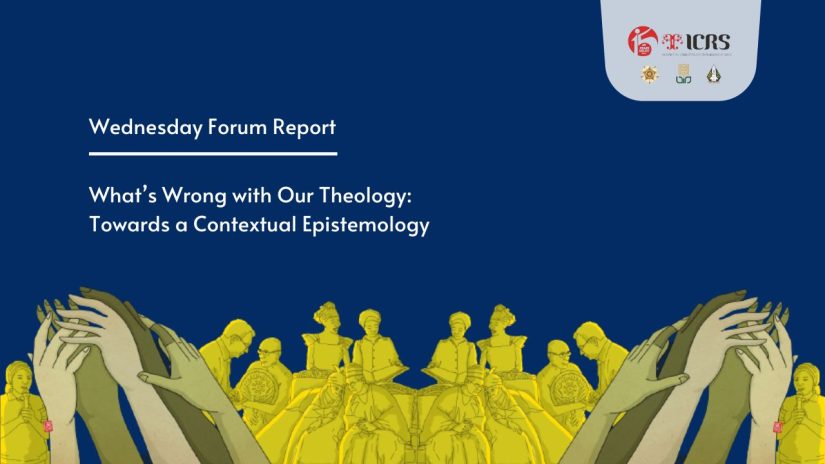 There are various social issues in local and global contexts that should be of concern to the theological thinking of every religion, one of which is the issue of oppression and poverty. It is hoped that theological thoughts directed at social concerns will encourage innovative action to create the common good.[[i]] Theology does not always have to start with digesting the thought of St. Augustine, Karl Barth, or Karl Rahner, but listening to the cry of people who are suffering, poor, oppressed, and marginalized. Following Gayatri Cakravorty Spival, the margin ‘is not a place of weakness or self-deprecation, it is a place pulsating with critical activity, it is alive with argument, controversy, and creative discourse.” That is where theology begins. At its best, theology is done by people at the margins. They are the ones most in need of, and are most eager to challenge and change the status quo from the structures that oppress to those that liberate. This argument and question was presented by Rev. Dr. Shanta Premawardhana at the October 26 Wednesday Forum, a weekly discussion forum organized by the Indonesian Consortium for Religious Studies and the Center for Religious and Cross-cultural Studies. Premawardhana is the president of the OMNIA Institute for Contextual Leadership. He currently serves as a member of the board of trustees of the Parliament of the World’s Religions, the board of governors of the National Council of Churches, USA, and the board of directors of Common Cause Illinois.

Unfortunately, according to Premawardhana, for quite some time this great task of theology has not been carried out properly. One of the main reasons is that theologies of the major religions have over the centuries colluded with empires such that untangling its first principles from those that legitimize the oppressions of empires is difficult, if not impossible. Hence, Premawardhana raises the provocative question, is it too late for religions, or can they listen to, learn from, and live in deep solidarity with those at the margins?  In answering that question, Premawardhana offers the disclaimer that his presentation is a Christian theologian’s reflection on an alternative theological epistemology, based primarily on the principles proposed by Paulo Freire more than fifty years ago. According to Premawardhana, many others have spoken on this, but none more influentially than Paulo Freire – of the Pedagogy of the Oppressed fame. We focus deeply on contextual learning as our method of theological reflection. Furthermore, Premawardhana argues that this frame of reference is ‘What’s wrong with our theology?’ puts the onus on theologians, theological educators, and preachers for not privileging the contextuality of the streets of Ferguson, Chicago, Jakarta, and other cities. This requires a paradigm shift for theologians, who are taught to hold the “received” tradition sacrosanct.

Premawardhana explains that according to Freire the first context is the classroom. There is an assumption that, in the class, the teacher knows everything and the students do not know anything. For Freire, this is false. The students know a lot more about their context than the teacher could ever know. Therefore, in the classroom there is a process to create a learning community where the teacher and students learn together. If that is the case, then who is in the room matters a lot, because to the extent they are absent, we are bereft of their expertise. It is also pivotal to ask students to identify their own areas of marginality and privilege, because all of us fall within a continuum between marginality and privilege. According to Premawardhana, it is also important to ask them to be the strongest and faithful voice among us for those in that marginality.  According to that, for Premawardhana, what is wrong with our theology is that 50 years after the civil rights movement we still struggle with blatant and brutal racism. James Cone in his Cross and the Lynching Tree points to this “blindness” with a strong critique of one of America’s foremost theologians, and his own predecessor at Union Theological Seminary, Reinhold Niebuhr. Despite his astute explications of a public theology, Niebuhr did not see the utter horror of lynching as a theological metaphor applicable uniquely to the U.S. context. Similarly, many churches today do not see the killing of young African Americans or the Black Lives Matter movement as having an impact on our theological constructs, and constructive theologies that are written on that matter still don not address the central notions of our received theologies. With Freire, education is never value-free. Theology was to form people into a certain kind of obedience to an empire whose values ignored those who were in the margins. It was clear to us that if theology is to have meaning, we needed to shift the paradigm, that context must always be the starting point of theology.

However, shifting the paradigm is hard. After 50 years of Pedagogy of the Oppressed, only a few organizations or institutions have really attempted Freirean ideas. Hence in 2016 OMNIA began to build disciplined peacemakers. According to Premawardhana, in a highly agitational training, participants learn to collaborate with each other, listen to those at the margins, build power individually and organizationally, and act strategically. They learn to have a clear-eyed and hard-nosed evaluation of the power they have. People in their communities may have a self-interest around a large problem. But the team knows how to cut a small slice from that large cake – one that is urgent, relevant, and winnable. Because each small victory leads to greater power and thereby to larger victories. They learn to be sharply focused, because they know that they have no time to be distracted, so they are disciplined peacemakers.

There are several success stories from this program. For instance, in February 2019, when Nigeria had a general election, women decided that there will be no election violence in a village that always saw election-related violence. They held a community feast. Two thousand women turned up who made a commitment that day that they will put pressure on their husbands and sons to stop them from engaging in election violence. In Bangladesh, a Dalit Hindu woman leads a team at the Swami Ramdass temple in the slums of Old Dhaka. She takes inspiration from Swami, who stood against caste discrimination and for equal rights for women. During the pandemic, Sri Lankan teams decided to build home agriculture projects. A Buddhist temple gave them 18 acres of land. They built a nursery there with all kinds of vegetables and yams. Today, 80 families in the area have home gardens that receive plants from the nursery and instructions in organic gardening so they have a source of food. At a time like this, when Sri Lanka is going through an unprecedented economic crisis, it has become a lifeline.

Furthermore, Premawardhana and OMNIA also noticed that one of the most prevalent and dangerous ideas that cover almost all human communities is the idea of supremacy. Supremacy is one of the three attributes he suggests that received theology brings with it. It is the idea that our way, our culture, our lifestyle, our institutions, our education is better than yours, so you should accept ours. The idea of supremacy is attractive, and the tangible benefits that come from that new identity are very valuable in this life. Supremacy is bolstered by another attribute, which is exclusivity, expressed in the notion that a certain religion is the only one that is true and brings salvation while others are heretical. Therefore, this kind of religion encourages others to convert. Premawardhana argues that exclusivity makes people intolerant and arrogant and creates conflict. It is a sickness that affects both Christians and Muslims, even though both religions, from the words of their founders and in the words written boldly in their scriptures, are to love their neighbors and to recognize the amazing diversity in which they are created.

Premawardhana argues that it is urgent to break through the paradigm of received theology, and even deeper than that, the European hegemony of ideas, and find a way forward for a contextual epistemology ta way of listening to, learning from and living in deep solidarity with those in the Margins. Dr. Premawardhana finds that, in the experience of OMNIA, the theory is that when people begin to see that interfaith collaboration leads to effective justice-oriented results, the culture will change from one that affirms or even tolerates extremism, to one that affirms pluralism. They have learned from several experiences on the ground that real change can be made by tinkering at the edges of tradition. It can be done only through the courageous action of powerful peacemakers, with theologies that arise from the ground up and create opportunities for collaboration, power building, and strategic action for peace.