[CLASS JOURNAL] Approaches to Interreligious Studies: Leadership in the Face of Religion 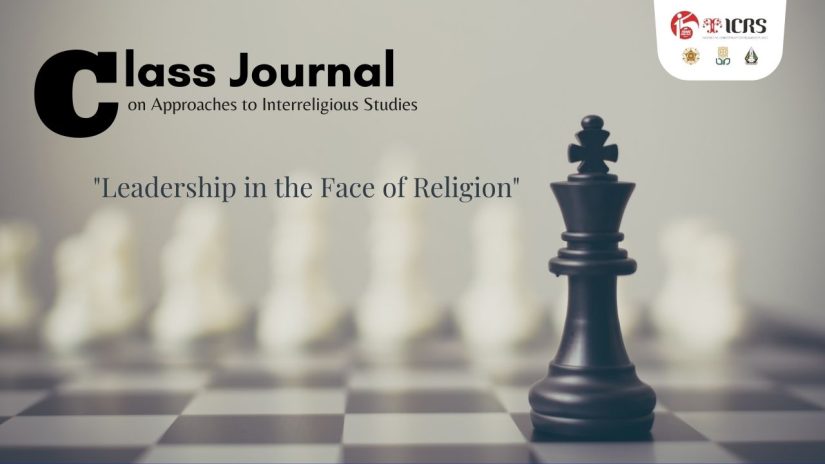 Religious leaders have the gift of relating sacred texts to the reality and transferring them to the community. The way the leaders interact with their religious followers is pivotal; his/her ideas must be in line with the community to succeed. Therefore, it is crucial to be consistent in what they believe and teach while bringing coherence to their message. This kind of relationship plays a key role for religious leaders as they provide guidance to their followers in their daily lives. Dr. Ismail Fajrie Alatas argues that authority in the sense of religious leadership means that the leader’s opinion is accepted and followed without coercion.

Alatas elaborated more during a class discussion as part of the Approaches to Interreligious Studies course ICRS. The meeting was held following the publication of his book entitled What is Religious Authority?: Cultivating Islamic Communities in Indonesia (2021), a mandatory reading in the class. Alatas considers himself both an anthropologist and a historian whose primary research interest is Islam in the Indian Ocean World and, particularly, the historical and contemporary connections between Southeast Asia and South Arabia. His teaching areas include history and anthropology of Islam, Islamic law and society, Islam and politics, Sufism, and Islam in the Indian Ocean World and in Southeast Asia.

In performing articulatory labor, actors are informed by different moral and social visions and rely on various conceptual and material infrastructures that are available to maintain durable relationships with their contemporaries, thus generating multiple articulatory modes. In relation to Alatas’ reference on articulatory labor, the importance of leadership in a religious tradition will affect the development of the practice itself and the continuity of the spiritual points in the lives of the participants. In fact, Alatas suggests that the labor can clearly be seen through the actual presence of the people living it, through the concrete evidence of action performed by the people involved in it, besides looking closely at the life of the leader. He adds that religion can be defined through the way people live it.

As an anthropologist, he finds that the teachings of religion are interpreted and carried on by the followers to enable certain religious beliefs to work in a religious community. When it works and becomes the social reality along with consequences within the society, religion develops specific regulations or norms for daily life. Up to this phase, we cannot help but keep track of the religious action conducted both by the followers or any particular religious leader.

An aspiring religious authority must engage in articulatory labor in the hope of being recognised by the world. These leaders could pass away, leaving the community unprepared to carry on the legacy. And, as Alatas continued, some could suddenly stop and focus on other goals not to mention other agendas or priorities which change the course of the performance. Articulatory labor could go wrong and end up changing the situation or condition the religious leader might achieve. Labor, which is “the direct remaking of nature as accomplished by a social man with the tools of his own creation” (Alatas, 2021), is a concrete activity that creates many social realizations.

A religious leader is successful when their efforts to make people follow his/her lead are not clearly recognised and their role in starting the practice goes unnoticed. We learn about religion from their followers, from the practice of social realities which have consequences, and gives measurement. The anthropological approach Alatas uses, ethnography, shows how an authority develops his/her persona or image to ensure the people become attracted to and follow his/her examples.

Some of these leaders can be said to be continuously working hard to gain their authority that people consider it the will of God or destiny. It is very interesting to learn that, given various movements and communities in our religious world, we tend to forget that the process of leading or making authority in religion can be made either intentionally or accidentally. Religious teaching can only be delivered when an authority holds a certain position in the society. It is argued that no authority can last long unless there is already an acknowledgement or position in the community.

An example he gives is the way Muslims still attend Friday prayer during COVID-19 even when the government’s religious officials tell them not to go. In this case, people follow what the imam in their neighborhood asks them to do (attending Friday prayer despite the prohibition). People respect and obey because of the personal and concrete relation they have with the local authority rather than the government officials. Therefore, we can conclude that trust and personal relationships are vital. Authority works only when the leader gains trust from the people and builds a relationship with them.

Towards the concrete universality

The religious authority is determined by discovering the process of the religious teaching and its relation to the followers. Studying the anthropological side of religious leadership will result in finding normativity, which is the commitment to cultural creativity. It will lead to determining whether there is a universality shared within the communities. In this case, the religious authority can help shape a mutual understanding of dialogue with one another. The process to build relationships must be clearly described so people have a clear picture using appropriate means. This is best started by studying or observing the followers, the members of the community, and their relation in daily life.

However, regardless of the method or approach, whether it is anthropological, historical, or social, one must be able to differentiate from the theological view to avoid judgment and bias.  This includes what society thinks of one particular teaching or authority itself, so that the findings can be used as a model for religious and interreligious dialogue. The concrete personal connection which results in trust and good relations enables them to enter the body of one community so it becomes a way of living. Their day-to-day practice could be taken as one study of a religious approach apart from a specific conviction.

Alatas relates this to the term “concrete universality” where people share one common thing that they all believe in and practice. Later on, either concrete or relational, difference is an absolute thing, even within the community of the same religion. There is a process to connect something in the past to another and also to modern life. A religious authority should make their ideas, thoughts, and teachings on this concrete universality transparent enough so that people can have a good description and be able to follow it. As it needs appropriate tools, sharing and accompaniment in the Christian belief, formation for Muslims, Buddhist and other religious traditions must be carried out accordingly.

These efforts, or we may say labor, would make concrete universality point out the importance of accepting common virtues believed and practiced in the world, which later could lead to mutual respect and understanding between one religion and another. By acknowledging as such, together we may learn that the way we view one religious tradition cannot be separated from our historical, social, anthropological, and cultural background. While seeing the original principles and practices of a religion believed and conducted in a certain community, one must also consider the development of many aspects they shared together with other communities practicing the same religion. It is here that the role of religious authority becomes significant and notable.

It leads us to question and reflect again on the important role of a religious leader and how he/she can direct the course of one’s religion through his/her way in practicing religious teachings and traditions. This authority helps to shape a deeper practice of religious teaching by the people and to build the common ground of concrete universality carried out by various religious groups through mutual respect and understanding.