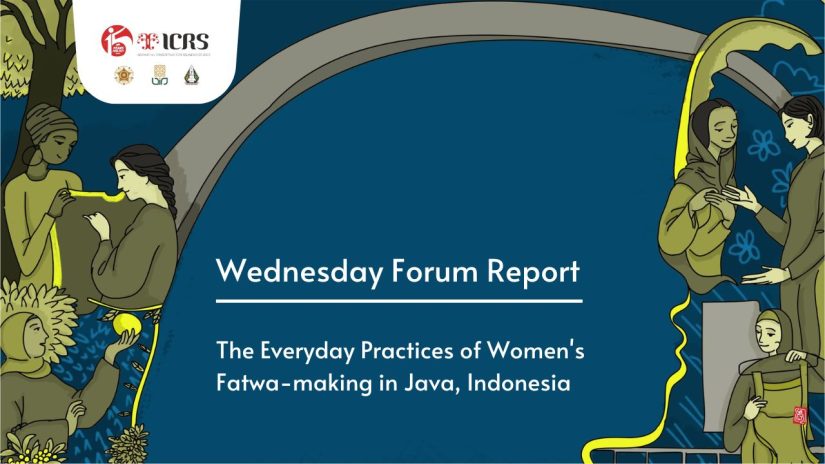 Work on gender and gender relations in Indonesia has demonstrated that gender matters in the discussion of state, including the country’s politics, religion, and civil society, often because the question of women’s authority[i]. Regarding religion, especially in Islam, the authority and legitimacy as ulama is an important issue because the legitimacy of Muslim women as ulama is always related to the rights that society ascribes to them to interpret religious texts and issue fatwas in response both to the daily concerns of their followers (jamaah) and to urgent social problems. These issues were the topics of discussion for the October 5th Wednesday forum, a weekly discussion forum organized by the Indonesian Consortium for Religious Studies (ICRS) and the Center for Religious and Cross-Cultural Studies (CRCS). The presenter on this occasion was Nor Ismah. She is a researcher at Leiden University in the Netherlands. Her Ph.D. research focuses on women issuing fatwas and community-based authority in Java, Indonesia. She also serves as curriculum review and institute development consultant at Musawah, a global feminist movement based in Malaysia. Recently, she was appointed as the director of LPPPM of Nahdlatul Ulama University in Yogyakarta.

In her presentation, Ismah explained that women issuing fatwas in everyday practices exemplifies two different ways of fatwa-giving. Firstly, the everyday fatwa-giving at the local level; it is everydayness of fatwa-giving by women. Secondly, the practice of fatwa-giving in the public sphere, involving hundreds of female Islamic scholars from different backgrounds, on controversial issues and at a site that is politically contested. Therefore, the questions are: How can we explain the proliferation of women leaders who give fatwas as a fact of life in Indonesia both at the local and national levels and how are these practices related to fatwa-giving that has been carried out so far in Indonesia, mostly by men and by male-dominated Islamic organizations? In conducting her research, Ismah uses anthropological approaches and gender perspective. From an anthropological perspective, in studying fatwa, Ismah aims to look at the everyday interactions between mufti and Muslim believers in the process of istifta‘ (seeking fatwas), and how that communication takes place in practice. Moreover, Ismah argues that the gender perspective that she used does not rely on the observation of a single established institution or fatwa council, rather, conducting a multi-site study as the fatwa is a scattered phenomenon; the approach, then, has been to follow the women (women’s experience as source of knowledge).

Through her research for the Rahimsa’s PUP Network (Kongres Ulama Perempuan Indonesia, pesantren and Nahdlatul Ulama background), desk research and ethnographic fieldwork in 2017, and interviews and observation with 30 interlocutors and more intensively with four female ulama, each from West Java, Central Java, Yogyakarta, and East Java, Ismah found four sites related to women’s legitimacy and authority regarding fatwa making. In the fatwa institution as the first site, Ismah found that female ulama most often become ‘observers and participants’ in the fatwa deliberations and do not hold positions as forum leaders. This is because religious authority and fatwa-giving are primarily performed by men; women can only really have authority when they ‘play the same role as men’. Therefore, to get space in a male-dominated organization, women need to have a position and network in the organization and demonstrate their Islamic knowledge.

Interestingly, the grassroots level is the second site. At this level, Ismah found that female ulama play important roles as religious guides and fatwa-givers for their religious followers, many of them developed a passion for teaching and working with communities through their parents and family, who are often also ulama or pesantren leaders. Ismah argues that their achievements are not determined solely, or even primarily, by their family background or related prestige.  The extent to which female ulama can exert authority depends on the effort they make to approach and engaging with the community and the support they receive from both family and community. Therefore, according to Ismah, in this context, the juristic authority of women can become more or less established depending on ‘bottom-up certification.’

However, Ismah found that the women ulama try to solve problems in the first site and the second site through activism and social movements, especially through Kongres Ulama Perempuan Indonesia (KUPI) 2017. Through this, female ulama play important roles as collective fatwa-givers concerning issues that are considered more controversial. Female ulama realize that fatwa is a key device for doctrinal change. Thus, female ulama can campaign to change biased doctrines into more progressive interpretations. Female ulama within the network combine community-based activism with the KUPI framework as a new method for interpreting Islamic texts. Furthermore, Ismah also found that female ulama also use magazines, namely Swararahima, Aulia, and NooR to correspondend with their followers. There are several key agents here, the readers who send in questions, the broader audience who read the questions and answers, female ulama who provide the answers, and the editorial staff of the magazines. However, although fatwa making is mediated rather than involving direct face-to-face communication, fatwa giving emerges as an interactive, ethical process.

Therefore, Ismah concludes that studying women who issue fatwas from an anthropological and gender perspective reveals fatwas with a variety of terms, meanings, and practices. The practices of making fatwas by women shows fatwas as a disruptive practice. When these widespread fatwa-making practices are made visible, revealing women’s engagement, they can shift the entire discourse around the fatwa, disrupting the idea of male domination. Fatwa as a medium to demonstrate juristic authority not only occurs in the context of religious institutions, but can also become part of the Islamic feminist movement. That has had two significant implications in the Third World Women’s movement.