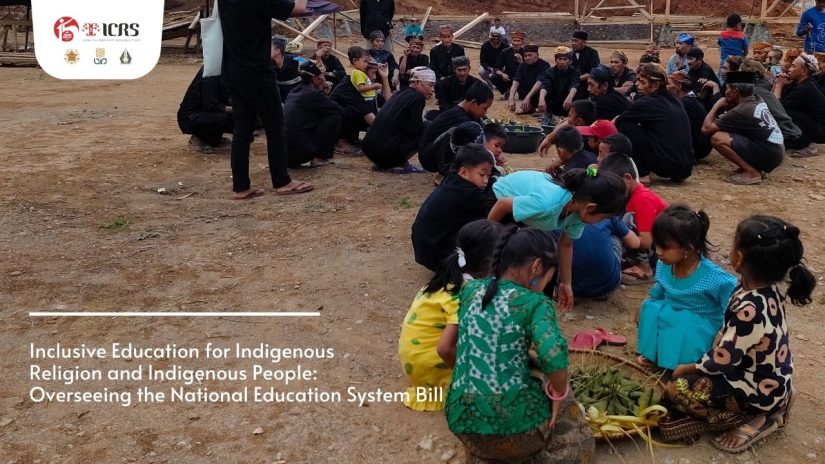 Written by Jekonia Tarigan
Religious education is one of the important elements in the national education system in Indonesia because it is seen as playing an important role in building the morality and mentality of students at every level of education. Along with the strengthening of recognition of adherents of the existence of indigenous religions in Indonesia through the Constitutional Court Decision Number 97/PUU-XIV/2016 and also the issuance of the Minister of Education and Culture Regulation Number 27 of 2016 concerning educational services for indigenous religions in education units, slowly indigenous religion’s adherents began to receive rights in the field of education. However, in recent days, there has been concern from the indigenous religion community because in the latest National Education System Bill in 2022, inclusive education for indigenous religions’ adherents has received less attention. This was the topic of discussion at the Kamisan Daring Forum on September 1, 2022, a forum that was organized by the Indonesian Consortium for Religious Studies (ICRS), the Center for Religious and Cross-Cultural Studies (CRCS), and the National Commission on Violence Against Women. (Komnas Perempuan), the Satunama Foundation, and several other organizations. On this occasion, one speaker was present, namely Andri Hernandi, who represented the Indonesian Followers of Kepercayaan Assembly (MLKI). Then there were three respondents, namely: Prof. Dr. Muhammad Adlin Sila (Expert Staff of the Minister of Education and Technology for Institutional and Community Relations); Dr. Samsul Maarif, Director of the Center for Religious and Cross-cultural Studies (CRCS) UGM; and Dr. Hastangka, Lecturer at Mercu Buana University Yogyakarta and researcher at the Indonesian National Research and Innovation Agency (BRIN).

Andri Hernandi as the speaker delivered a presentation with the title ‘Opportunities and Challenges of the Position of Indigenous Religions in the Draft Law on National Education System”. Hernandi started his presentation by quoting a statement from Ki Hadjar Dewantoro, who stated: “We had a religion in ancient times. We certainly see a light which recedes deeply into ancient Javanese history. This was followed by another one etc. and it is perhaps just because of this changing of religion that Javanese are not fanatically religious. We prefer to take over various doctrines from other religious. The most important thing, of course, is to lead a truly moral life in as far as this is possible, and that in our opinion is true religion. And although ‘kejawen’ is not recognized as one of the official religions it is unjust to deny its existence. It would thus be totally untrue to say that we stand here as Godless people. Far from it.”

Hernandi sees that the recognition of the existence of indigenous religions in Indonesia is the result of a long process and struggle. According to Hernandi, the 1945 Constitution Article 1 paragraph 3 states that the Indonesian state is a state of law. Then in Article 27 paragraph 1 it is stated that all citizens have the same position in law and government and are obliged to uphold the law and government with no exceptions. Article 28D paragraph 1 states that everyone has the right to recognition, guarantee, protection, and fair legal certainty and equal treatment before the law. Furthermore, Article 28I, paragraph 2 states that everyone is free from discriminatory treatment on any basis and is entitled to protection against such discriminatory treatment. Hernandi also took an example from the National Symposium on Indigenous Religion which took place in Yogyakarta on 7-9 November 1970 chaired by Mr. Wongsonegoro, with the theme ‘Highlighting the Legal Basis for the Life of Belief in Indonesia in the Framework of Guiding Orderly Law Based on the 1945 Constitution’. This symposium concluded that the legal basis for the life of belief (Kebatinan Kejiwaan and Spirituality) is contained in the preamble to the 1945 Constitution and Article 29 of the 1945 Constitution, which places trust towards God Almighty as parallel to religion in the efforts of the Indonesian people to practice and implement their beliefs. In fact, in accordance with the decision of the Constitutional Court No. 97/PUU-XIV/2016 related to article 61 paragraph 1 and article 64 paragraph 1 of Law No. 23 of 2006 in conjunction with Law No. 24 of 2013 concerning population administration, it states “Family cards and identity cards containing information ‘religion’ must also be accompanied by a statement of ‘belief’ to provide legal certainty to adherents of indigenous beliefs.”

However, according to Hernandi, education for indigenous religions has only recently received attention, mainly through the Regulation of the Minister of Education and Culture No. 27 of 2016 concerning Educational Services for Kepercayaan in Education Units, which has been implemented by a total of 2,868 students spread nationwide. based on data collection in 2020. However, so far, the implementation of indigenous religion education still faces many challenges. The challenges in question include the absence of teaching staff who are able to teach subjects or courses, as well as the understanding and openness of stakeholders in each educational institution to carry out education in indigenous religions.

Hernandi argues that in the midst of these difficult dynamics, new challenges arise when the nomenclature of indigenous religion in the 2022 National Education System Bill, which consists of 18 articles, only contains 8 words of religion, and there is only one word of belief in one article, namely Article 3. It is said that there is almost no more attention and space given by the state to education adherents to indigenous religions in the new National Education System Bill. In fact, according to Hernandi, the expected quality of human resources is towards humans who have Indonesian morals who fulfill spiritual qualities in accordance with the first precepts of belief in the One Supreme God; intellectual quality in accordance with the development of civilization in education; social quality in accordance with Indonesian local wisdom and global insight; and the quality of the nation and state. Therefore, the scope of educational material for belief in God Almighty includes: the oneness of God, prohibitions and obligations, character, the dignity of belief and history. Therefore, the hope of believers in Indonesia is that indigenous religion education will still be included in the Indonesian National Education System because it is important to build moral trust, local wisdom, and the identity of the archipelago’s traditions in the midst of globalization.

Hernandi’s presentation was then responded to by Prof. Dr. Muhammad Adlin Sila (Expert Staff of the Minister of Education and Culture for Institutional and Public Relations). Sila said that in fact the discussion of the National Education System Bill had just been registered with the national legislation program of the House of Representatives of the Republic of Indonesia and is not yet binding. However, Sila also acknowledged that quite a number of community groups have responded to the draft of the National Education System Bill, mainly related to clauses that are considered not in favor of their group’s interests, including the indigenous religions community. Furthermore, Sila said that the Ministry of Education, Culture, Research, and Technology of the Republic of Indonesia was still very open to discussions with community groups, even to hold hearings with the House of Representatives. It is hoped that through the forum for hearings and discussions, indigenous religion community groups can still communicate their aspirations.

Dr. Hastangka expressed a different opinion. According to Hastangka, based on the Constitution, Indonesia should always protect all its people with all their rights, including in the preparation of regulations for the national education system. However, Hastangka appreciates the government for daring to rewrite the 2003 law into a new law that integrates the Law on Teachers and Lecturers and the Law on Higher Education into a new draft law on the national education system. This is a good step because regulation is an important key in providing education to all people. But Hastangka emphasized that the vision of this bill must be in accordance with the state’s vision for education for all its people. The drafts that are criticized must always be improved to accommodate the aspirations of the entire community. If something is missing, it should always be fixed.

In the end Dr. Samsul Maarif, director of CRCS UGM argued that currently all parties must focus on indigenous peoples who are often discriminated against. For Maarif, there is no meaning in the words inclusive and non-discriminatory in this law but in fact indigenous groups are discriminated against. According to Maarif, academics have made efforts to promote the existence of indigenous people as a group that has many roles in the life of the nation, for example, in protecting nature and even in various other fields. Therefore, Maarif deeply regrets that indigenous religions education was omitted from the National Education System Bill. For Maarif, the results of his analysis found that there are leaders from religious institutions who think that if indigenous religions are included, it will lead to polemics in the community. The choice is to separate indigenous belief education and religious education, the second alternative does not include indigenous belief education at all in the national education system and bases this need on the Minister of Education and Culture, and the third is to maintain the existing formulation by providing a specific explanation of the meaning of religion and the notion of belief. This raises the question of why it disappeared, but this is a political issue; therefore, the group of believers also needs to consolidate, because this is a continuation of discrimination against the group of believers as has happened in history. For Maarif, this issue was not seen by the academic drafters of the draft law.