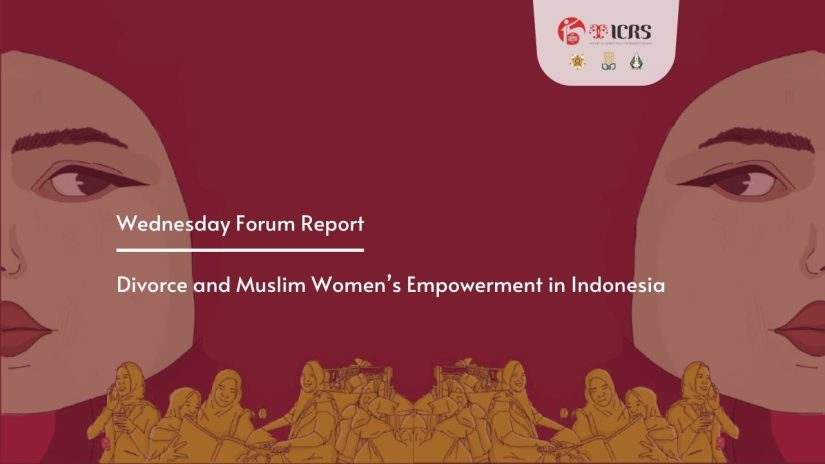 Marriage is central to Indonesia’s social fabric and critical in defining socially legitimate relationships. However, marriages often face the threat of divorce due to various factors.[i] As a Muslim majority country, the Indonesian state’s marriage legislation concerns various aspects of classical Islamic law that have the potential to adversely impact women in the realm of divorce. Muslim family law is a crucial determinant of women’s rights in many Muslim settings. Muslim family law is commonly interpreted to stipulate a family structure in which husbands are breadwinners and household leaders, while wives are responsible for the domestic realm and may be expected to obey their husbands. However, the norms and practices in majority Muslim societies have changed, with increasing numbers of women pursuing higher education and careers. Interestingly, today, divorce cases are increasing in Indonesia.

How do Muslim women express their experience of divorce and how do Indonesia’s Islamic courts accommodate the changing expectations of marriage? How might a religious legal system have unintended consequences, promoting women’s higher aspirations for marriage and potentially shifting gender norms more broadly? These are the questions raised by Rachel Rinaldo in Wednesday Forum, on 2 November 2022, a weekly discussion forum organized by the Indonesian Consortium for Religious Studies (ICRS) and the Center for Religious and Cross-cultural Studies (CRCS). Rinaldo is an associate professor of sociology and faculty director of the Center for Asian Studies at the University of Colorado- Boulder. She is currently on sabbatical as a Fulbright Scholar in Indonesia, conducting research on women and work in the COVID era.

In her presentation, Rinaldo explained that in the global context there are changes regarding Islam, marriage-divorce, and gender. According to Rinaldo, most Muslim societies are currently experiencing changes with respect to marriage and divorce. It is clear that Islamic law regulates marriage, divorce, and inheritance for Muslims, having a major influence on women’s status and rights. However, divorce is often easy for men but creates social and economic disadvantages for women. The shifts in marriage and gender in Muslim societies, including Indonesia, actually shows a positive change, because there is a shift to ‘companionate’ marriage and an emphasis on romantic love. This is related to the fact that today more women are entering higher education and the workforce, while in many countries there have also been reforms to the judiciary, a liberalization of divorce laws, more women judges, gender-sensitivity training, and an emphasis on access to justice.

In the Indonesian context, the primary view of marriage envisions marriage roles as complementary. Women’s subordination is embedded via the stipulation for obedience, the husband as family leader, and financial disadvantages for women who divorce. The secondary view of marriage is a physical and spiritual bond based on love, cooperation, and respect (companionate). Here, the husband is designated as the head of the  household, is obligated to support family, and the wife takes care of children/household and obeys the husband. However, divorce rates were among the highest in the world in the first half of the 20th century (opposite of US/Europe trends). Indeed, there is a decline in arranged marriage, rising ages at marriage, and higher educational attainment.

Given that Indonesia’s institutionalization of Islamic family law is relatively recent, how are changes in marriage and gender playing out in this Muslim country? According to Rinaldo, divorce was stigmatized for middle class women in late 20th century. There was also increased state regulation of marriage, related with the 1974 marriage law and Kompilasi Hukum Islam (KHI) or Muslim Family Law 1991. Interestingly, divorce rates began rising again starting in 2000. A recent study based on the 2012 Indonesia Family Life Survey found that nearly 20% of women 15-49 years old in Java had experienced divorce and most divorces were initiated by women (such as the US/Europe).

Furthermore, in recent institutionalization, Indonesia gave religious (Islamic) court’s jurisdiction over Muslim marriage/divorce in 1989. Different from other Muslim family laws, KHI provides women with expansive grounds for divorce (cerai gugat), men have unilateral right to divorce (cerai talak) but must go through a court, and women get custody of children under twelve-years-old. Unfortunately, with cerai talak, women are entitled to several forms of financial restitution, but with cerai gugat, women are only entitled to limited financial restitution. In this context, KHI can be understood as a state Islamic vision of marriage. Regarding the Indonesian context, Rinaldo did research for two years from 2016-2018. Rinaldo conducted in-depth interviews with 34 divorced women and 16 divorced men in the Malang and Yogyakarta areas (all Muslim). She also interviewed nine judges from religious courts in Malang and Yogyakarta and did court observation in Malang and Yogyakarta. Informants in this research were women, most 25 to 45 years old, with a wide range of occupations, many of whom were from the lower middle to upper middle class (but included some low-income women).

Through her research, Rinaldo found that women find certain types of behavior to be unacceptable, especially long-term infidelity, violence/abuse, frequent conflict, and lack of responsibility (financial and emotional). Indonesian women also emphasized the need for love, communication and mutuality in marriage because for them a “companionate” vision of marriage that can be found in the KHI is pivotal. Women are aware that infidelity, lack of financial support, and inappropriate behavior are grounds for divorce in the KHI. The lack of financial support elicits almost automatic support from the judges. Moreover, KHI gives women a way to hold husbands accountable and leave marriage, especially when husbands can be deemed irresponsible or abusive. One case related to this comes from Tia, a teacher, university graduate, with one child. Her husband was jobless, yet threatened by Tia’s higher salary. Tia was frustrated by her husband’s total lack of participation in childcare. Tia shared an example that one night she asked her husband to give their child a bath because Tia was coming home late, but her husband would not do it. Tia’s husband just hung out with his friends; he did not even care that Tia came home. Tia admits that she was tired of it because for her they needed to work together.

In another case, Rinaldo also found that women felt able to leave their marriages because of their ability to earn money to support themselves. They also received support from family, friends, and colleagues and they have pride in becoming financially independent, including for lower class women. It can be seen from Nur’s experience. Nur is a university graduate, runs an online business, and has no children. Nur’s husband demanded she stop working, then refused to give her money, and later took all the money from her business. For Nur, her husband is abusive and unfaithful, because her husband did not allow Nur to pursue her dream. Interestingly, several religious leaders supported Nur getting a divorce. They said Nur has a right to a better imam, because Nur has experience that when she reminded her husband to pray, he yelled at Nur and threw plates at her face. Finally, Nur thought that she cannot tolerate her husband’s attitude, so she decided better not to waste her time with a person who cannot change. Similar narratives also come from Elok, a high school graduate and former migrant worker. Elok explained that her husband did not provide any financial support, so she preferred to live alone and earn her own income, instead of having a husband who does not provide for her living.

Interestingly, Rinaldo found that in court judges were often sympathetic to women, seeing marriage as a partnership while emphasizing gendered responsibilities of spouses. Judges were often very critical of husbands’ behavior, viewing marriage characterized by physical or emotional abuse as “broken”. Judges also admitted that the mediation process rarely works and that their role is mainly to try to resolve divorces in a relatively amicable way.

Rinaldo concludes that many women found it relatively easy and quick to obtain a divorce, but women’s experiences with divorce through Islamic courts are not always positive and include difficulties with receiving child support and other financial support that they are owed. Moreover, many women are knowledgeable about Islamic rights/obligations in marriage in KHI (via formal education, media, family/friend/colleague networks). However, women do not challenge the assignment of the majority of domestic responsibilities and expect husbands to support the family financially and/or emotionally. Women express aspirations for marriage founded on mutual respect, love, and companionship. Therefore, Rinaldo  suggests a broader shift in marriage ideals among women. Women are also better able to act on such ideals than previous generations due to higher educational attainment and more opportunities in the workforce.

Finally, regarding Islamic family law and women’s empowerment, Rinaldo argues that KHI and the Islamic legal system give Indonesian Muslim women a means to exit marriage. However, there is a paradox because the Islamic legal system’s emphasis on the husband’s obligations promotes traditional gendered division of labor (a husband should support the family financially), but this stipulation also gives women a way to hold husbands accountable. Thus, while the Islamic legal system reinforces conventional gender expectations, it facilitates women’s exit from marriages. There are also unintended consequences, in which the religious legal system’s gendered conception of marriage can accommodate women’s aspirations for more fulfilling marriages. Women do not necessarily challenge gendered religious norms of marriage and family, but seize on the opportunities presented by the Islamic legal system to exit unfulfilling/unhappy marriages. In that context women’s ability to leave marriages may have long term implications for gender norms and practices.