Drawing a Line in the Ulema-State Alliances: A Glimpse of the Public Lecture by Prof. Ahmet T. Kuru 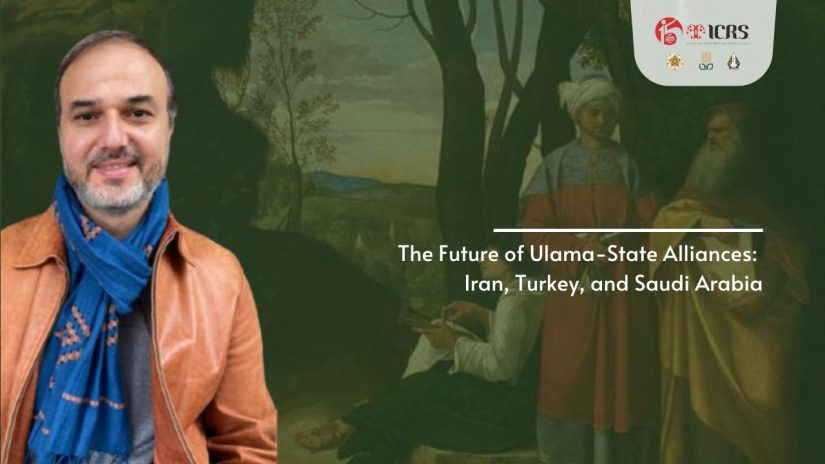 The persistence of ulema-state alliances in the contemporary Middle East has been a debate in our modern days, both religiously and politically. It raises questions as to whether it is still relevant in the context of the situations that are happening these days, and whether it plays any significant role in the development (or underdevelopment) of most Muslim-majority countries. There has been a large implication of authoritarianism in these countries which emanate problems not only compared to the Western countries but also with the terms of world averages. Ahmet T Kuru, Professor of Political Science at San Diego State University, shared his thoughts as an alternative argument in examining the participation of Muslim scholars in the state government. He wrote a book entitled Islam, Authoritarianism, and Underdevelopment: A Global and Historical Comparison (2019), which argues that neither Islam itself nor Western colonialism holds responsibility for the high levels of authoritarianism and low levels of socioeconomic development in these countries.

Kuru’s findings connect how Islam experienced a Golden Age where they predominated economic and scientific prosperity between the eighth and twelfth centuries, along with a significant military power. This was a period in which Islamic civilization gained success and developed a great deal. On the other hand, Muslim communities faced difficulties in politics and socioeconomics before colonialization began. Therefore, Western colonisation did not inflict the decline of Muslim supremacy. These historical aspects and shifts in intellectual and economic creativity, as well as contemporary politics, were discussed by Kuru at a forum held in Yogyakarta in November 2022. The public lecture “The Future of Ulama-State Alliances: Iran, Turkey and Saudi Arabia” was organised by the School of Graduate Studies UIN Sunan Kalijaga, the Indonesian Consortium for Religious Studies (ICRS) and the Center for Religious and Cross-Cultural Studies (CRCS) University of Gadjah Mada, and was attended by lecturers, scholars, and students from the respective education institutions.

The Ulema – State Collaborations We Know

In his presentation, Kuru argues that starting from the eleventh century onward the alliance between religious structures and military-based government gradually slowed the intellectual and economic creativity of the Muslim community. This then resulted in the tendency for underdevelopment of the Muslim majority countries which can be easily seen in four aspects which are below the world average: Gross National Income, literacy rates, school and education, and life expectancy level.  Although during the Golden Age Muslim society bore intellectuals who established prototypes for the modern camera, medical inventions on certain bacteria and viruses, paper making and bank systems, the situation began to change in the mid-eleventh century continuing through the seventeenth century with the acceptance of the Christian and other religious denominations’ contribution to the world.

Kuru continues that the merger of the ulama and the state in this period highly affected the role of the Islamic government since only 9% of 3,900 Islamic scholars were state officials during the Golden Age. The rise of the alliance as viewed by Kuru occurred due to ideological factors in the Sunni orthodoxy and Qadiri creed, economic factors in the land distribution and administrative system, political reasons for military power and conquests, and also the acknowledgments of Muslim agents and madrasa system which led to marginalization of independent scholars and merchants. There were limitations drawing from the ulema-state alliance resulting in deep authoritarianism and repression of free-thinkers and independent entrepreneurs which eventually sabotaged future development. These groups later resisted and demanded autonomy, pushing for secularism in society due to the history of ulama-state repression.

Western supremacy, according to Kuru, resulted from three major inventions (gunpowder, nautical compass, and the printing press) that left the Muslim world behind since the latter mainly focused on ‘gunpowder’ for the purpose of military conquests. Unlike the separation of Muslim scholars and political authority in the Golden Age, the rise of colonialization created changes in several fields explained above and established a more centralized state. This generated the type of religious-state authority that forced the society to obey in order to protect themselves against invasion. In the case of Iran, Turkey, and Saudi Arabia, those who were eager for reformation united to control the practice of Islam on their terms. They enlarged the role of the military and the so-called bourgeois over politics and economics in a way that re-established the ulema-state alliances. In addition, today income from oil sales is used to support these alliances, but soon there will be no more oil to enable this connection in the future. It is urgent then to improve democracy and economies, furthering development through dismantling these ulema-state alliances, or simply by encouraging autonomy.

Secularism is not suggested by Kuru for the future of Muslim majority countries, but autonomy in all fields. It is best to separate the state and ulama with their own functions and to reform the Islamic political system rather than for it to remain interconnected. To accept that democracy is human made instead of religion-based will assist the new model of modification and demolish authoritarianism. Kuru underlines the importance of separating religion and state by inviting intellectuals and independent bourgeois to bring about a kind of secular arrangement of political power which affects all human fields.

One interesting point stated by Kuru to a question raised by a participant on how to improve the Islamic democratic system in Muslim countries to be able to strive in the future. He starts by suggesting that the Muslim community should take democracy as a system where they can integrate themselves in the process without really naming it as Islamic democracy. Only by putting more moral value and less corruption in the system will a better democracy appear. He continues that, in this very way, other people outside the Muslim community can differentiate it from the previous democracy and avoid claiming names which later become a failure. It may remind us about the way the first Christians in the early days got recognised by their way of living which was different from the others’. They did not put labels on themselves but the society saw them as followers of Christ, imitating his life and treating people without distinctions. In other words, in order to improve the quality of democracy without so much entanglement from either the state or the religious representatives, people should focus on pushing ahead for a fairer and more egalitarian society. This open invitation by Kuru confirms his optimism on a new way of reforming democracy in the Muslim majority countries solely in the democratic essence to better suit the needs for development.

In the closing remarks, the Director of the Postgraduate School UIN Sunan Kalijaga emphasised the importance of this new theory brought up by Ahmet Kuru to point out the influence of the ulama-state alliance in regards to the underdevelopment of the Muslim majority countries and that autonomy is needed to eliminate the authoritarian dominance. Later, Dr. Zainal Abidin Bagir, the Director of ICRS UGM, expressed his concern that the ulama-state alliance in Indonesia might appear in many forms since there are several religious organisations which already made some efforts to participate more in the state due to the needs of power in economy, politics, and so on. He inquired a confirmation on argues that there has been any historical or empirical example to support the autonomy for the ulama and the state for Indonesia to carry out. Prof. Kuru responded by restating the state mentioned as holding both military and political power in the country and that the future of the ulema and state alliances requires strong autonomy for both parties to fully achieve democracy. Ultimately, we may face errors during the process and only find the answers in our own time.