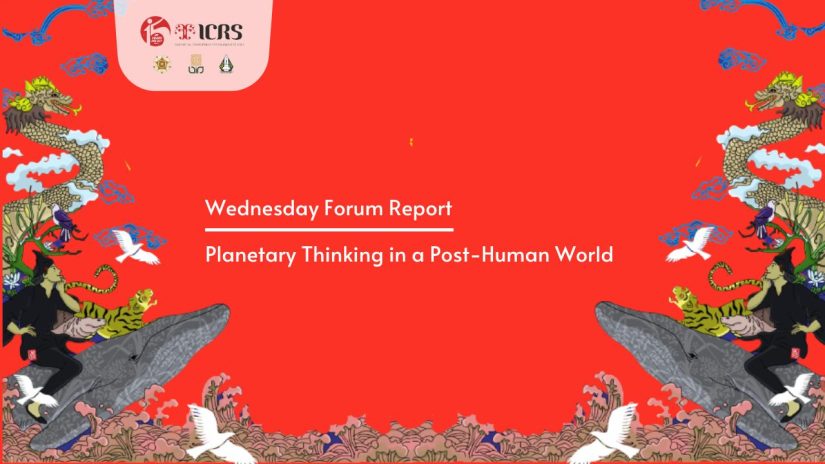 The ecological crisis that humans are facing today is rooted in the way humans perceive him/herself, and how they relate, and treat other entities or other creatures, organisms, and the plant. In examining this problem Whitney Bauman argues that it is pivotal to be involved in the discussion by promoting ethical thought and perspectives of a post-human world from animist and new materialist perspectives that depend on a planetary spirituality. This argument was presented at the November 9, 2022 Wednesday Forum, a weekly discussion forum organized by the Indonesian Consortium for Religious Studies and the Center for Religious and Cross-cultural Studies. Bauman is an associate professor of religious studies at Florida International University in Miami, Florida. He is also co-founder and co-director of Counterpoint: Navigating Knowledge, a non-profit based in Berlin, Germany that holds public discussions over social and ecological issues related to globalization and climate change. His areas of research interest fall under the theme of “religion, science, and globalization.” His publications include Religion and Ecology: Developing a Planetary Ethic.

Interestingly, to locate his argument within the discourse, Bauman discusses several thoughts from several scholars. First, Sylvia Wynter is a colonial scholar who is trying to reevaluate the human of the humanities, because the western discipline has separated the humanities and the sciences about who is human. Bauman realizes that the idea of humanity has many different roots. From Christian theology there is a concept of Imago Dei. Others may argue that it begins before that, for example related to Platonic thought. However, Bauman agrees with Wynter, who explains that the perceptivity of who is human has strongly influenced by Western bourgeois liberal monohumanism phenotypically race-white-aesthetic corporeal standard, and this has been institutionalized and ostensibly universally applicable norm of being human and thereby of (white) beauty that semantically activates the neurochemical opiate reward process.

Furthermore, Bauman explained that the critique toward the discipline can also be seen from what Tomoko Masuzawa has done in her work on the invention of world religions. Masuzawa argues that the concept of religion was also formed during the colonial era and that the way that religions are constructed is based upon a specific model of understanding of what religion is and what it is not. On the other hand, Walter Mignolo shows the darker side of Western modernity, that science was also formed in the colonial period, because the development of modern science depends on colonization. The development of technology increasingly in the 19th and 20th century led to underdevelopment of other places. Thus Wynter, Masuzawa, and Mignolo are critiquing the very disciplines of the distinction of humanities and religion and the division between human sciences and the natural sciences and even the link with social sciences. Bauman argues that this construction also influences the conception of what nature is. Unfortunately, it often perceives as dead stuff, and humans are outside of it. Therefore, Bauman argues that we need to deconstruct our thinking of it and allow other disciplinary thinking to enter the university.

The other thinker discussed by Bauman was Aph Ko, who wrote a book entitled Racism as Zoological Withchraft. Her work examines the history of the development of scientific methods such as zoology and genetics and how they are tied up with the issue of race. Aph Kho argues that her goal is to show how the animality construct that oppresses anyone who deviates from what human culture considers to be an ideal human is an integral part of all the oppression. As people of color, Aph Kho argues that racial liberation cannot be reached only by examining the experience of violence in isolation from other current social phenomena. It is important to understand that this narrative of animality is the real problem and that to meaningfully liberate Bauman argues that Aph Ko has a larger goal than just sort of pointing out the history of racism and the development of science. Aph Ko offers the thought and solution that if we are going to attack racism or sexism and these kinds of things, the first thing to do is attack speciesism. The idea that humans are above nature because automatically create hierarchical ordering regarding what counts as human or the ideal of human, which separates human from nature. Thus, according to Aph Ko, it is urgent to return humans to nature and return vitality to the rest of the natural world.

The next thinker who was discussed by Bauman is Rosi Braidotti, who is concerned with the issue of the posthuman vs. transhumanism discourse. Transhumanism wants to enhance humans to more cyborg than biological. This group does not see a future for the planet, so they suggest that humans are going to build a new space station on Mars as proposed by Elon Musk who build rockets to go to the space, or Jeff Bezos who thinks that humans need to build space stations and live there to give Earth time to regenerate. Meanwhile, post-humanism is different. According to Braidotti, it is pivotal to think beyond the human, within the context of planetary and to think about what happens to the human as we evolve beyond humanity. What the posthuman convergence points to instead is a multi-directional opening that allows for multiple possibilities and calls for experimental forms of mobilization, discussion, and at times even resistance. The keyword of posthuman scholarship is multiplicity.

Post-humanism does not want to live on the planet, but admits our embeddedness within the planet. In some senses, Braidotti argues that we are already in a posthuman world, and we are already parts of microbiome because most of the cells that make up our bodies are not human. Humans exist as ecosystems which include bacteria and viruses. Interestingly, for Baidrotti, there is not just one posthuman, but the point is to think beyond the ways in which we have constructed our world thus far and to imagine new possibilities for the human in the world because the way that the modern Western world has structured our disciplines and the technology transfer from that has brought us things like global climate change and the great extinction period. It has also brought us economic inequities and injustices on a global scale. Thus, if our knowledge systems are failing us in some major ways, then we need to undiscipline and rediscipline ourselves towards a way of thinking about the world and humans therein.

The next area of scholarship that was drawn by Bauman is related with indigenous methodologies and indigenous studies research. One thing that posthumanism and indigenous methodologies have in common is that they want to see the human as part of the rest of the natural world; even human technology is also part of nature, so there is a human technology and nature spectrum. In accordance with that, Margaret Kovach writes that modern western models assume that the universe is an empty static space where atoms and particles live independently of each other and do not change. God, through Newtonian physics, does not have a role in the causes and effects of the universe, and prophecy or a greater purpose does not exist, as life is simply a cause and effect dynamic, and all energy patterns can be accounted for by human intellect with human as all knowing.[[i]]

According to Bauman, Kovach tries to articulate her own experience doing research as an indigenous woman and with indigenous people about the difference in worldview from the modern Western worldview and that of many indigenous people. The modern Western paradigm sees nature only as dead stuff, and humans are above nature, and there is nothing beyond the mere material world. Kovach basically argues that for indigenous people having to go into a modern Western-style conversation and educational system, this is the sign of the death of their own ways of thinking and their way of relating to each other and the rest of the natural world. Hence, indigenous methodologies need to be based on some sort of animism, or the spirit and nature as an eminent way of thinking about ideas or how they matter or ideas of humans as part of an ongoing emergent process of nature. She also understands that knowledge is always embodied, meaning that we can only know from a specific subject position. For that reason, what Kovach argues is a big part of her methodologies and many other indigenous methodologies is storytelling, so that we can weave together different stories from different places. Rather than being a universal monolithic understanding of truth, Kovach argues that truth must have multiple perspectives. The more perspectives we get on a given situation, the better understanding we will have of the event taking place. The more hermeneutics the better because it gives us different perspectives from different embodiments into the lives of a given text. For Kovach, knowledge is subjective and value-laden,  and humans are embedded in this larger planetary community. Places are not only a background but are integral to the culture, language, and history of a given community.

Bauman acknowledges that he gets the idea of planetary thinking from people like Gayatri Spivak who argues that the global is the view from nowhere and the planetary is multiple views from below that connect to get a better understanding of what the planet was like. Furthermore, Bauman was also influenced by William Connolly, especially his thought about materialism in which he argued that all entities, including humans, are planetary creatures which are involved in the so-called geo-evolution. Religions, ideas, and values are all part of this world which is related to the material world which returns to shape the world and civilization in specific ways and determines what from the Earth  is available for human use and what is not. This is a type of new materialistic way of understanding the power of religions. Bauman uses planetary perspectives in constructing knowledge that we live on a single planet that has formed in many ways within a very long process of many different assemblages of organisms, so it is not a preformed static thing. All entities, human and non-human, are what makes up this planetary community. Therefore, we need to re-attune to the effects of the pandemic, to the problems of climate change, and to the extinction of species, and we need to stop and consider what we are doing to the planet.

Bauman also argues that we need to reattune our disciplines toward the planetary context through undisciplined thinking, storytelling, and by developing planetary humanities and constructing new paradigms. Bauman also argues that religious sources will play a pivotal role in planetary reattainments through ethical values, music, bodily approaches (yoga, meditation, and dancing),  rituals, and epistemological and textual approaches to present truth and thought. Finally, critical planetary humanities are based on the idea that different bodies or different embodiments matter. Knowledge always derives from particular places, so we need to listen to multiple perspectives in order to gain a better understanding of any given situation. Therefore, we need critical theories on race, gender, queer, disabilities, animal studies, post and decolonial, post humanism, science and futurism, etc. Bauman argues that following Bruno Latur, we cannot become an escapist, because when we think in terms of critical zone, we are locked in and cannot escape the planet we live on.